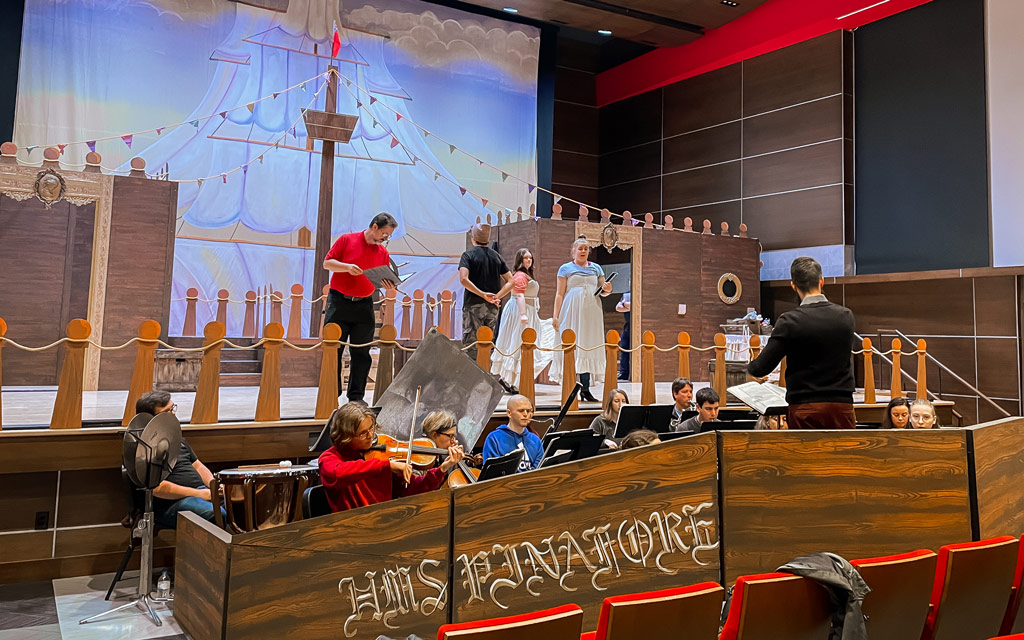 Central College’s Department of Visual and Performing Arts will present Gilbert and Sullivan’s “HMS Pinafore,” a comic operetta in two acts. Performances run Nov. 17-20 in Douwstra Auditorium on Central’s campus. This is a fully staged production with a pit orchestra.

One of Gilbert and Sullivan’s most beloved works, “HMS Pinafore,” tells a classic tale of a forbidden love and the troubles that must be overcome before our hero and heroine can be together. It’s an opera with a bit of tongue-in-cheek humor.

“My understanding is that these annual performances came to be a favorite of Tulip Time visitors each year, though that tradition was cut short by his retirement,” says Sean Stephenson, assistant professor of music and director of the opera.

“To recapture some of the magic and memory of this great tradition, I have put together a production that involves students, faculty, alumni and community members,” Stephenson says. “Many of those involved have memories of previous Central productions or have family members who were involved with these in the past. Douwstra Auditorium has historically been the venue for opera performances. With the recent renovations, we are delighted to utilize this wonderful concert hall once again.”

Even before Williams grew this fine tradition, the Gilbert and Sullivan operetta was a mainstay of the Central performance schedule. Susan Kuyper, a 1970 Central alum and bassoonist in the pit orchestra, knows of a “HMS Pinafore” performance that took place in 1935. It featured her father – Hospers Kuyper, a 1936 Central graduate – as the villain, Dick Deadeye. It and many other productions by Gilbert and Sullivan have been performed since, though the most recent performance was in 1990.

Logan Fehlhafer, Class of 2024, is playing the role of Captain Corcoran. His mother, Heidi Houzenga Fehlhafer, a 1993 Central alum, was involved in another Gilbert and Sullivan operetta, “The Mikado,” while she was a student at Central.

“Having done research on Gilbert and Sullivan, I am interested in the way that they use music to drive the plot,” Fehlhafer says. “The music is put together with the dialogue like two puzzle pieces that make for a really cohesive show — though the story is completely and hilariously nonsensical!”

The “HMS Pinafore” performances are at 7 p.m. on Thursday, Friday and Saturday, with a 2 p.m. matinee on Sunday. Tickets are available online and at the door. Admission is $5 or a donation of two non-perishable food items for the Pella Food Shelf. The performance is free with a Central ID.