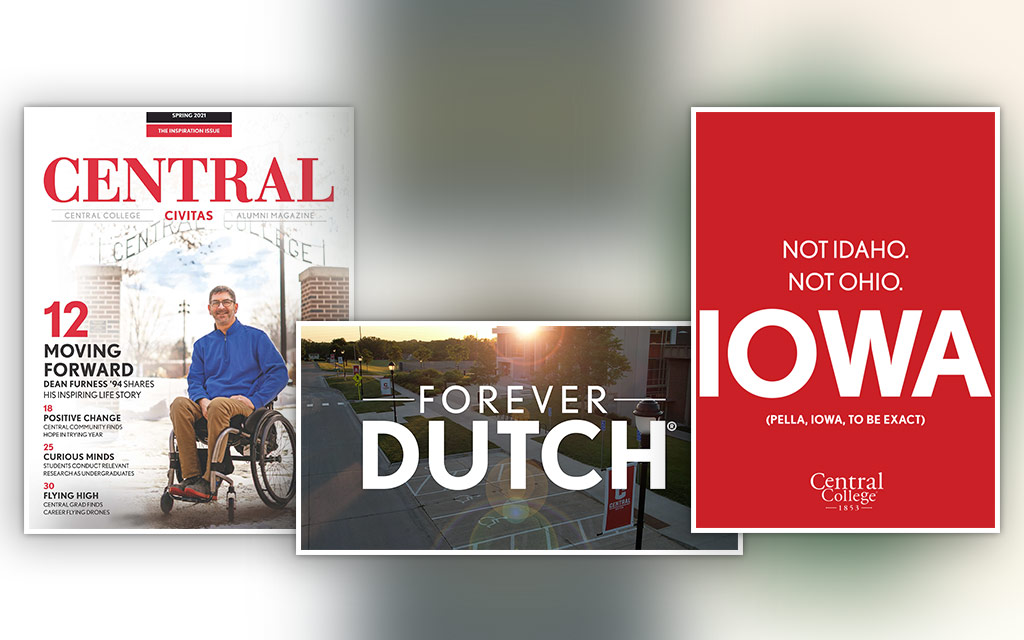 Central College received three Best of Class awards from the District VI Council for Advancement and Support of Education.

Central was recognized for awards in:

The magazine entry described the insights into the issue. In the early months of 2021, the world faced the wearisome reality of the pandemic. The Central editorial staff developed a theme around inspiration for the Spring 2021 Civitas. Creative inspiration comes in many forms and ideas came from alumni across the county. The editorial team melded ideas together with a mission to be uplifting and positive while telling the Central family story and engaging with alumni. The magazine is available online.

Alumni and friends of Central called and sent notes of appreciation in response to the issue. The major gift officers received calls and comments about the “great timing,” “touching” and “uplifting” issue. In addition, six readers sent in gifts totaling $5,750 using the business reply envelope stitched into the magazine.

Central’s marketing and communications team submitted a suite of viewbooks that won the best publication student recruitment award. The objective of the viewbooks is to educate prospective students and their families on various aspects of the Central experience. The viewbooks are sent to specific audiences on a cyclical annual basis. Categories of viewbooks include athletics, family, financial aid, leadership and transfer. View the suite online. Central also received silver recognition in the Council for Advancement and Support of Education’s annual Circle of Excellence awards at the national level earlier this year.

The multi-million Forever Dutch® initiative to expand and renovate the A.N. Kuyper Athletics Complex and P.H. Kuyper Gymnasium at Central was among the largest capital projects in the college’s history and the most ambitious for Central athletics. This project is the culmination of several years of fundraising for renovations, which resulted in a total of $17 million raised.

The Forever Dutch® video shows off the dramatic upgrades to the facility and reminds alumni donors of the impact of their gifts and what it means to be Forever Dutch, in addition to being a hype video for prospective students. The college hired a drone operator to capture overhead footage both inside and outside the building, and staff searched through the college’s archives to illustrate the complex’s fascinating history and overall transformation. Watch the award-winning video.

“In the higher education communications realm, Central competes with large state universities who hire agencies to produce materials as well as private colleges. I am so incredibly proud of the work our admission and communications teams are producing at Central,” says Sunny Gonzales Eighmy, Central’s vice president for advancement and a 1999 Central graduate. “This prestigious recognition is a testament to their hard work and dedication to Central’s success.”