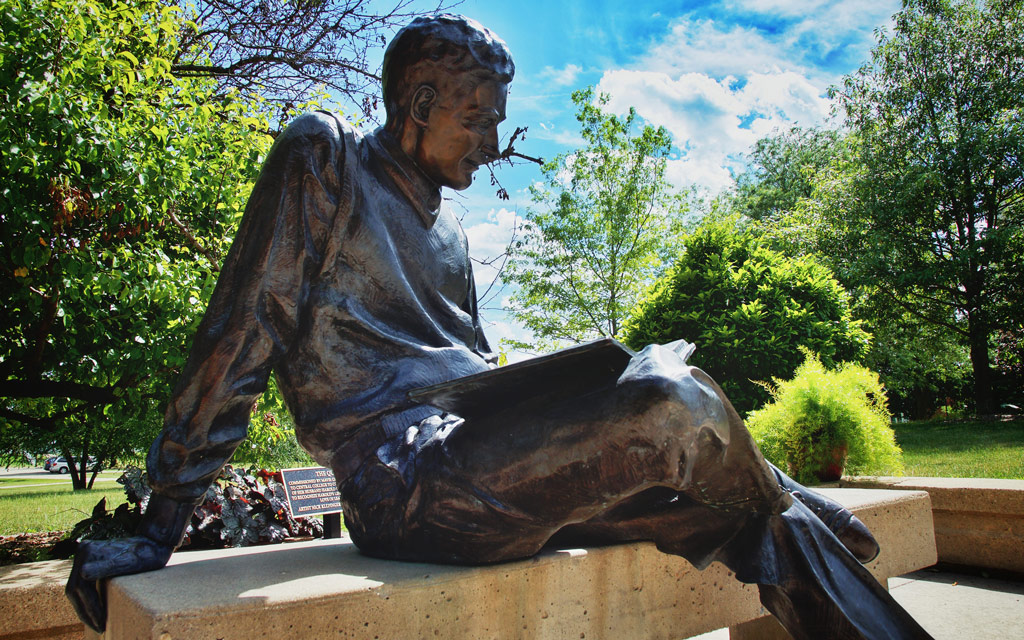 By Lauren Brown ’24 | Photos by Joshua Edmonds and Paul Joy

Over the last few decades, works of art have become a quintessential part of the Central College landscape. Some are campus landmarks; others hold important memories. Revisit some of these works by local and nationally known artists and discover the stories behind them. Follow the art installations as you walk from the Ron and Joyce Schipper Stadium at A.N. Kuyper Athletics Complex to the Maytag Student Center. 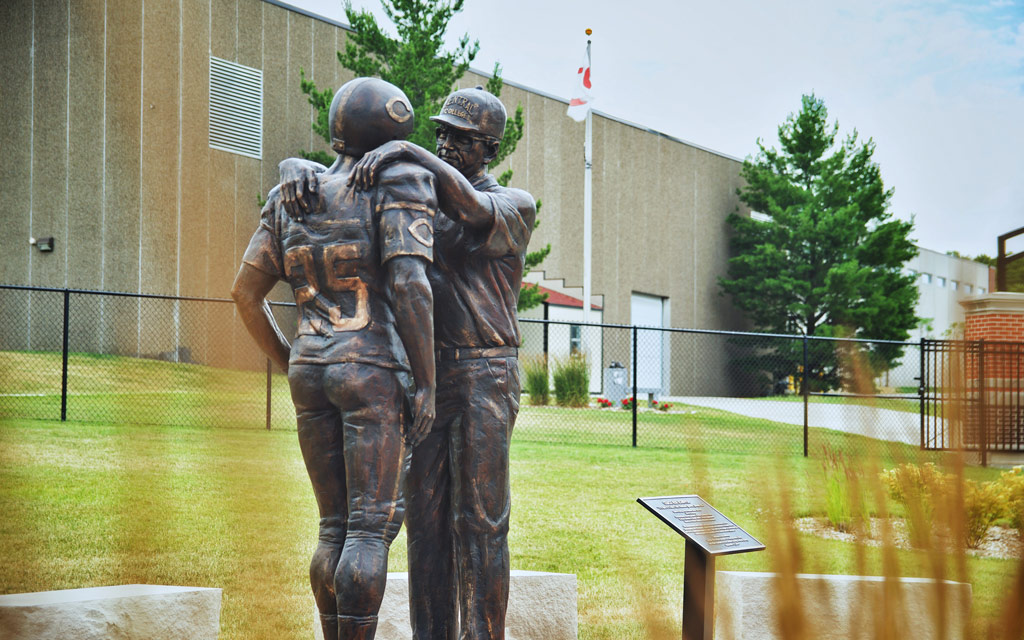 A seven-foot bronze statue of coach Ron Schipper is right at home inside Ron and Joyce Schipper Stadium, where Schipper himself served as head football coach from 1961-96.

The sculpture was made by Brian Hanlon of Toms River, New Jersey, who has created more than 200 pieces of public art, including statues of Dean Smith, Shaquille O’Neal, Yogi Berra and other sports legends. The sculpture was made possible with support from the Central family. The piece was installed last year. Based on a photograph from a game in 1993, the piece evokes Schipper’s devotion to coaching Central students in football and life.

When Jim Schulze, professor emeritus of psychology, retired, generations of alumni searched for a way to honor his legacy at Central. Former students contributed artifacts, memories and money to commission this Roe Center painting by Tilly Woodward, immortalizing vivid memories of “Schulze.” You’ll spot his favorite mug, best-loved books, flying pig and Mayan hammock, bordered by Ralph Waldo Emerson’s creed, “This is to have succeeded.”

Schulze taught at Central from 1968-2007. He taught many semesters in the Yucatan and continued arranging student homestays in a Mayan village after retirement. Before his passing in 2020, Schulze and his wife, Lisa Rock ’87, spent winters in the Yucatan.

Gather Up the Fragments

“Gather Up the Fragments” sits in the large window on the third floor of the Roe Center. This piece, done by John Vruwink ’58 and donated in 2010, is dedicated to David Roe, Central president from 1999 to 2010. Along the inside of the blue piece in the middle, it reads, “Gather up all the fragments so that nothing may be lost.”

The Frog Fountain and Snake Stream

Outside the back doors of the Roe Center stands a stone frog catching water in its mouth. Carved into the ground is a curvy stream in the shape of a snake. Around this sustainable water feature, which was dedicated in memory of Carl Boat ’05H, past chair of the Central Board of Trustees, by the Boat family in recognition of his service and leadership at Central, are stone benches. One of which reads, “We are truly educated when we live in harmony with the Earth.” 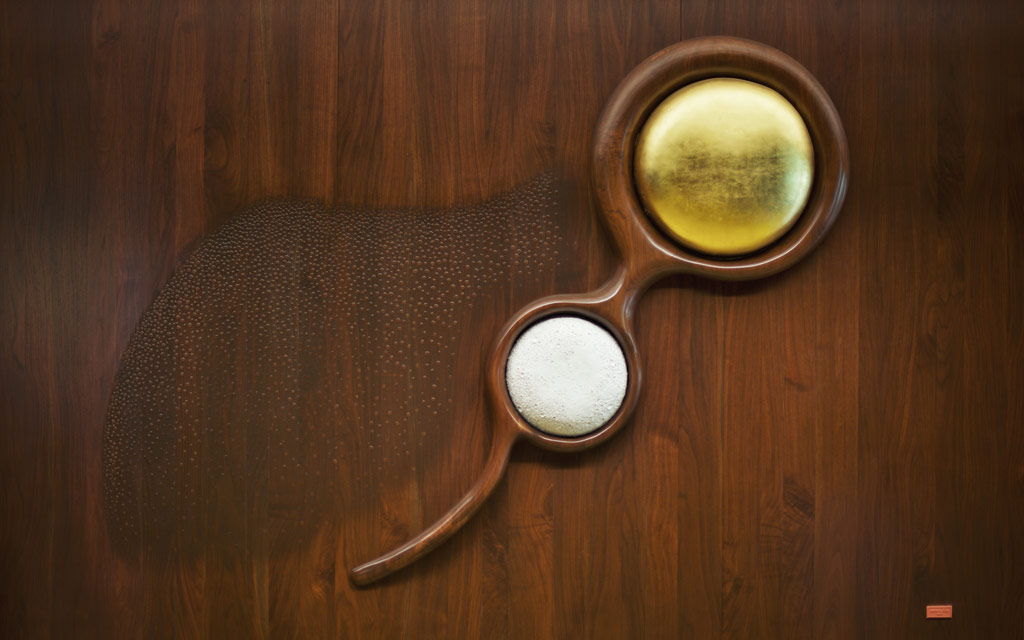 When Roe Center’s building site was chosen, the former home of Lawrence Mills, late emeritus professor of art, was torn down. When facilities staff presented Mills with the wood salvaged from his old walnut tree, he created a mural to grace the new building — plus all its smaller, hidden frogs!

“The point is not simply to confront viewers with a giant frog,” Mills said upon installation, “but to show something new each time they see it. To an imaginative viewer, the frog’s gold-leaf eye becomes the sun, along with a ceramic moon and a swath of the galaxy.”

To inspire curiosity, 24 frogs are hidden within the Roe Center. Can you find all of them? 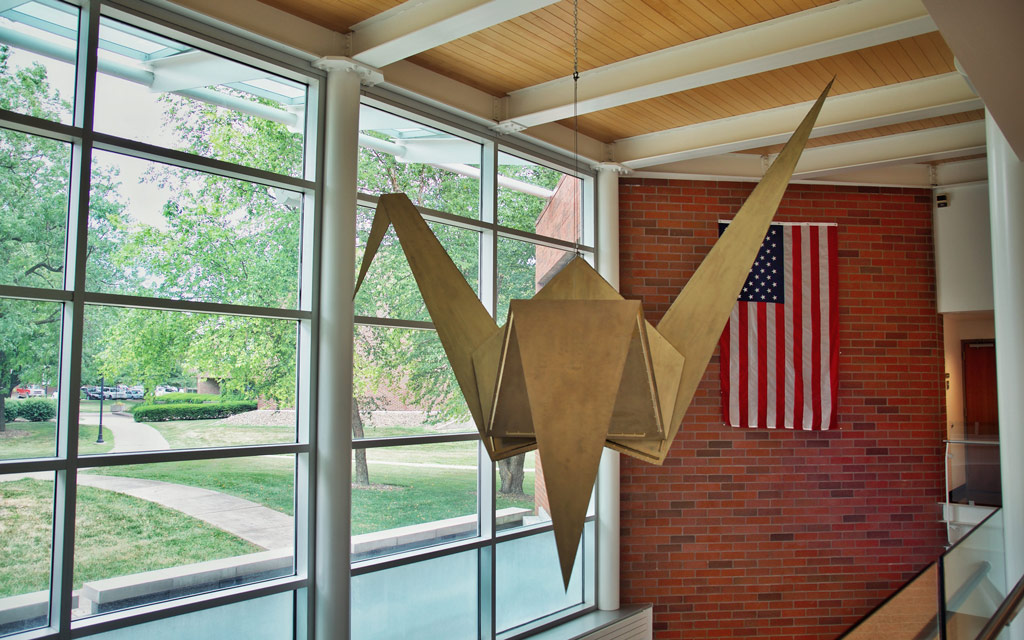 A young girl inspires a prayer for peace in the play “A Thousand Cranes,” based on the life of Sadako Sasaki. Born in Hiroshima during World War II, Sadako dies of “bomb disease,” or leukemia, while attempting to fold 1,000 paper cranes and receives her wish from the gods, as told in a Japanese legend.

Tom Thatcher, former technical director, created this award-winning sculpture for Central’s production of “A Thousand Cranes.” It now hangs inside the entrance of Vermeer Science Center. Thatcher’s professional set, lighting and sound designs have been seen in nearly 100 productions by schools, colleges, universities and professional dance and theatre companies. After its debut at Central, Thatcher’s “A Folding Crane” appeared in Theatre Design & Technology magazine and was exhibited at a national conference in Phoenix, Arizona.

During the A Cappella Choir’s 2016 trip to Denver, students were inspired to create a street piano location for Central. Donated by the family of Tyler Born ’20 and decorated by music service society Mu Gamma Pi, it offers a place where anyone can play and fill the steps of Geisler Library with live music.

“We want the piano to be available to people of all skill levels,” says Wyatt Rath ’18, a past president of Mu Gamma Pi. “It’s the idea that music, beauty and art should be accessible to everyone.”

Mu Gamma Pi hopes the piano will become a landmark on campus where passersby can live out the quote by Robert Schumann that adorns the piano: “When you play, never mind who listens to you.”

It’s the elephant, the hatchet, the totem pole. When this 16-foot, 2,000-pound sculpture was installed on campus, its steel surface was painted black, gray, red, blue and yellow. Sculptor Tom Gibbs loved how Geisler Library rose dramatically behind the piece, saying it was one of the best environments he’d ever worked with.

Instantly an icon, the sculpture was commissioned in 1974 by a grant from the Iowa Arts Council with Paul and Joan Kuyper Farver. It was installed on Peace Mall in 1975, just east of Geisler Library.

Just west of Pietenpol Hall is a feature designed for contemplation and communion and was gifted by Peter H. Kuyper ’13H and Lucille Gaass Kuyper ’13H in 1976. The private center at the end of a short spiral walkway is surrounded by a curved stone wall that reads “Ye shall know the truth and the truth shall make you free (John 8:32).” The plaque outside tells us that this place “depicts the all-encompassing nature of the search for truth and its ultimate focus in the life of Christ.” 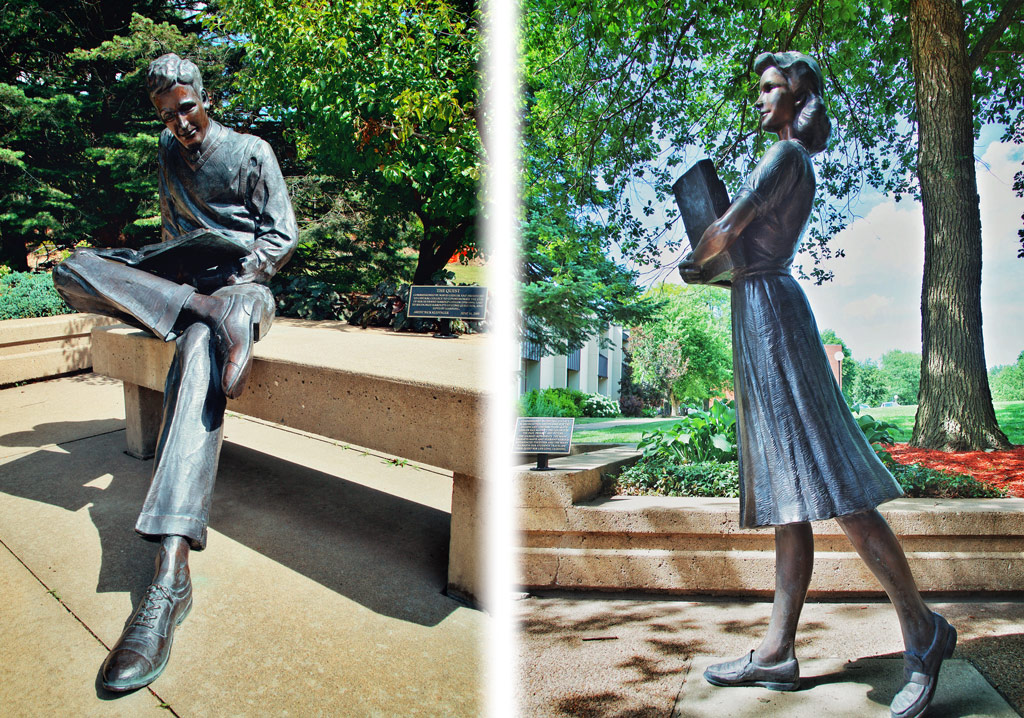 All who walk to the east on the Peace Mall, beginning at Geisler Library, will run into Harold and Mavis. The formal names of these sculptures, “The Quest” and “The Journey,” were winning student submissions by Steve Perkins ’01 and Joe Schwanebeck ’06, respectively. The sculptures represent Harold and Mavis Hobbs Geisler ’00H, who met in Mingo, Iowa, and attended the same high school, 10 years apart. Growing up during the Great Depression, neither was ever able to attend college. However, that didn’t prevent them from enjoying a lifelong devotion to books, learning and young people.

After the couple’s marriage in 1942, Harold was diagnosed with a serious lung disease. Mavis educated herself about the disease and became his caregiver, helping Harold outlive the illness by nearly 50 years. Harold died at age 83, after 56 years together. Mavis passed 10 years later in 2009.

After Harold’s death, Mavis commissioned a statue of him by Newton sculptor Nick Klepinger to celebrate Harold’s love for education and Central. Mavis loved seeing people interact with Harold’s likeness on his bench. So, when Central later commissioned another sculpture by Klepinger honoring Mavis, she requested the bench remain open for guests to sit with Harold. 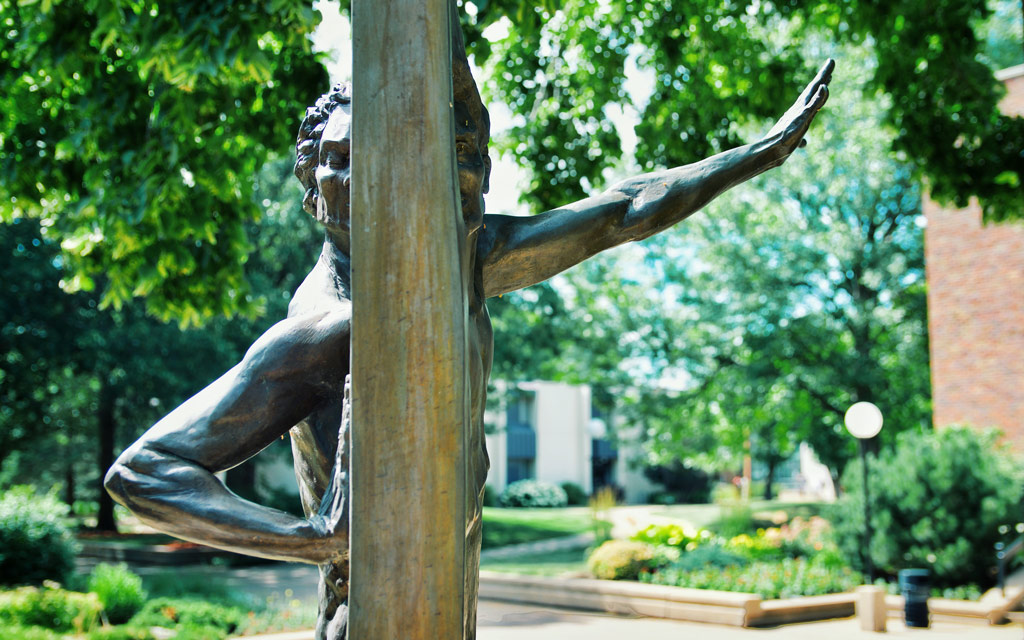 The Other Side of Eden

Sculptor Andrew De Vries was inspired to create this dynamic piece when he watched a ballet dancer crash into a wall! De Vries, of Denver, had spent his first two years as an artist sketching dancers in motion before discovering his love for sculpture.

“The Other Side of Eden,” installed in 2002 near the Chapel, illustrates a powerful moment while expressing facets of the human condition — life and death, struggle and transformation, barriers and breakthrough. This sculpture was a gift from Jim Ebbers ’48 and Marlyn Rietveld Ebbers ’14H. 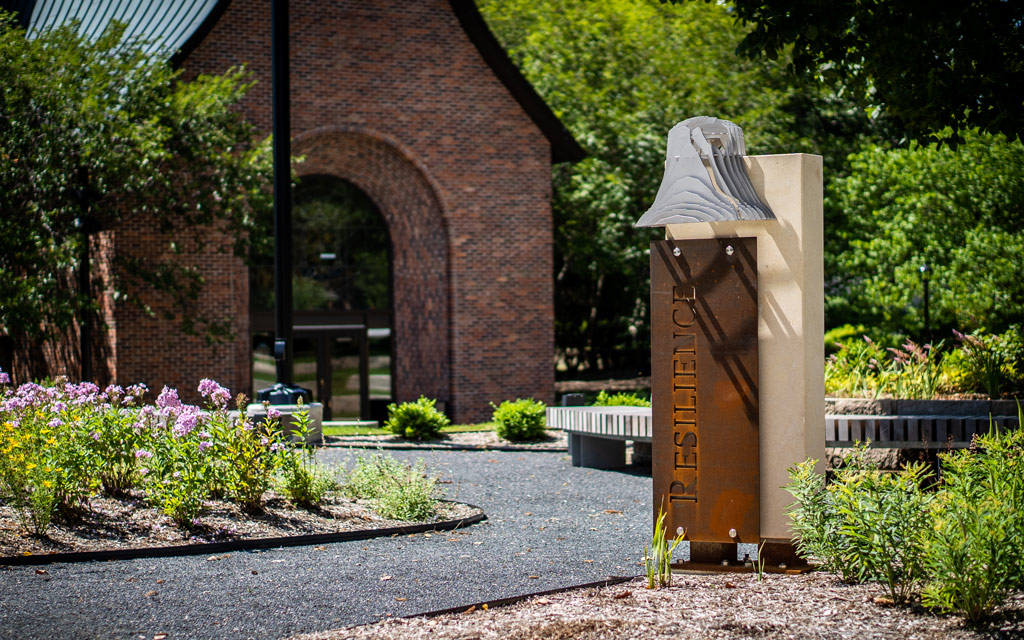 Central’s amphitheater, placed in the center of campus, is used for outdoor celebrations, studying, lectures, reading and performances. It includes the Chapel, a history garden and “The Other Side of Eden” and honors former student Wallace “Spencer” Stepenske ’64, who left a generous estate gift of more than $1 million.

The Chapel is open to all students of different faiths and is often a meeting place for Campus Ministries, InterVarsity and Fellowship of Christian Athletes (FCA).

In the History Garden, two of 14 garden markers planned for the site have been installed — service and resilience. The intention is to keep Central’s history and core values alive. Other planned markers include community, connection, continuity, courage, creativity, diversity, leadership, sustainability and transformation. 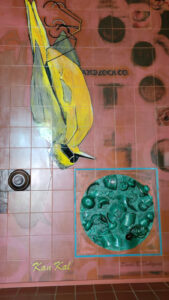 A centerpiece of visual arts for Central, Mills Art Gallery is a large, open room inside Lubbers Center where six to eight art exhibitions are held each year to allow artists to represent a range of media and styles and serve as a resource for teaching and lifelong learning. Students and clubs can also put exhibitions together.

At the gallery entrance, you’ll find a ceramic mural by artist David Buel Dahlquist. The piece entitled Kan Kal (yellow bird in Mayan) was commissioned to honor Lawrence Mills, artist, scholar and late emeritus professor at Central. The imagery in the ceramic sculpture references Mills’ interest in Mayan art history and teaching in the Yucatan.

The Lubbers Center also houses the glassblowing center where students create vases, bowls and glass treasures. These are often on display in Lubbers and Central Hall.

If you look carefully, this sculpture frames key memorials of Central history. The two pieces connect when viewed from the second floor of Maytag Student Center. And you can’t reach the entire sculpture without crossing “Lubbers’ Lagoon,” as the pond was known when first created.

Added in 1990, this steel and redwood sculpture was funded by a grant from the Maytag Corporation Foundation. The winning design by Carl Reed was chosen from among 160 competitors and provoked vehement debate among students who found it aesthetically lacking. Today, the sculpture still connects themes and histories — just like Central’s never-ending pursuit of the liberal arts.

A Real Piece of Work

Intersections students teamed up with Iowa artist David Williamson in 2008 to create a sculpture from Lake Red Rock’s trash. The scrap materials, gathered on Service Day, were reformed as the Class of 2012 helped design, cast and weld a new masterpiece. “Personalize Your Masterpiece” is now displayed in Maytag Student Center. 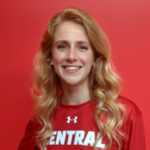 Hi, everyone! My name is Lauren Brown ’24, and I am from Underwood, Iowa. I am a communication studies major and Spanish minor here at Central. I’ve been a part of the volleyball team since freshman year and decided to join the track team as a sophomore. I also am a member of, and the female representative for, Central’s Student-Athlete Advisory Council and TMK Hall Council President. Finally, I work as a writing tutor on Sundays and an editorial assistant for the Communications Office during the week.

Although my extracurriculars keep me busy, I still have time to hang out with my friends and go to different events on campus. I also enjoy running; watching movies or Netflix shows; and reading books in my free time. I hope you find exactly what you are looking for at Central and join the family! Go Dutch!