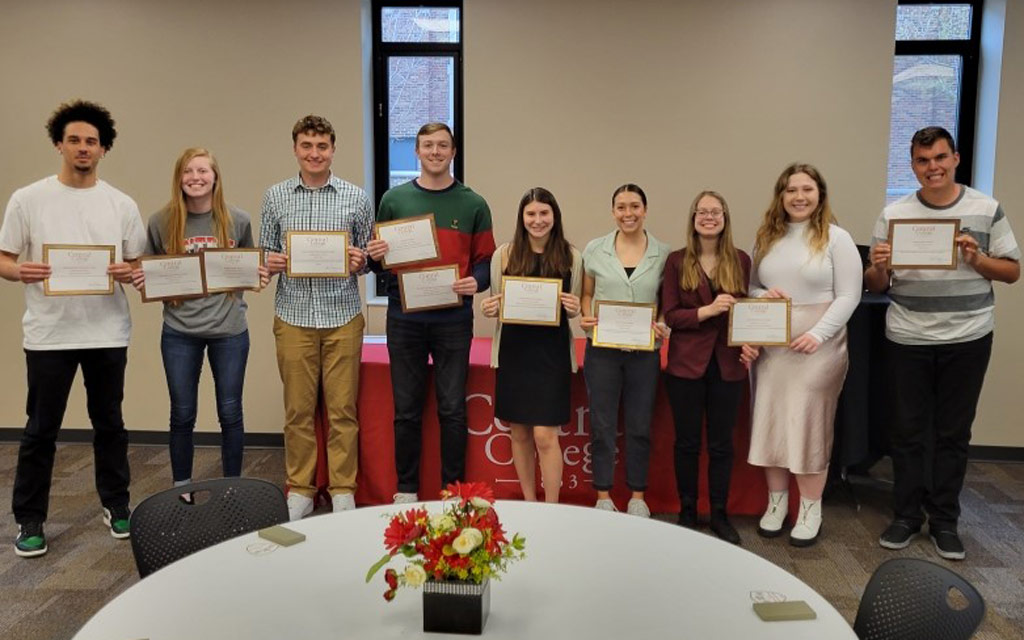 Central College’s Student Development office released the 2022 student leadership awards. This year 56 nominations were received from students, staff and faculty. A panel of faculty and staff reviewed the nominations and selected awardees.

“Congratulations to our student leaders who are opening opportunities and building connections for the future. We’re proud of the achievements these students are making,” says Sean Wiseman, Central’s assistant dean of students.

The recipients of the 2022 Outstanding New Leader Award are Zach Anderson from Iowa City, Iowa, Class of 2025, and Gannon Oberhauser from Parkersburg, Iowa, Class of 2024. This award honors a first- or second-year student volunteer who shows leadership promise, while not necessarily holding a leadership position, through their exemplary contributions to a recognized student organization and have helped the organization grow their participation.

The 2022 Service Award goes to the campus group Students Against Sexual Assault. The recipient demonstrates a superior commitment to the greater community during the past academic year through active service.

The Annual Theme Award recognizes a student volunteer or recognized student organization who demonstrates outstanding leadership in promoting and implementing the college’s annual theme. This year’s theme was Responsible Citizenship, and the award recipient is Muhumure Nzabakiza from Des Moines, Iowa, Class of 2023.

The recipients of the Unsung Hero Award are Brad DiLeo from Iowa City, Iowa, a 2022 graduate, and Ashley Lupkes from Iowa City, Iowa, Class of 2023. This award recognizes student volunteers or student paraprofessionals who have positively influenced a program or organization from behind the scenes through a positive attitude, a willingness to help in whatever capacity necessary and a commitment to excellence in the completion of tasks and duties.

This year’s Outstanding Event Award recipients are the Students Against Sexual Assault group’s “What Were You Wearing?” exhibit and Common Ground’s drag show. Jaymi Gibbs from Galva, Illinois, Class of 2024, and Lillie McKee from Mingo, Iowa, Class of 2025, represented the groups. The award recognizes a successfully planned, efficiently run, effectively advertised and well-attended event that enhanced the social, educational and/or cultural life at Central, which was sponsored by a recognized student organization or student-led volunteer group.

The Organizational Excellence Award honors a student organization for making positive contributions to and building community at Central, outstanding programming and/or strong organizational structure, leadership and action. This year, the recipient is United Minority Alliance. Keaton Rodgers from Peoria, Arizona, Class of 2023, represented the group.

The Bridge Builder Award recognizes a student volunteer, recognized student organization or paraprofessional who has worked to establish connections across campus; hosted collaborative social or educational events, explored diverse cultures or education about issues that have challenged the campus. The recipient of the Bridge Builder Award is the MLK Student Planning Team.

The Diversity and Inclusion Award goes to Quinn Deahl from Cedar Rapids, Class of 2023, who is recognized for her commitment to issues of diversity, inclusion and social justice through programming and campus initiatives.

The Senior Student Development Award is presented to a student who has made notable contributions within student development while at Central. This award recognizes sustained, outstanding leadership in integrated, co-curricular and/or extracurricular activities and involvement to improve an aspect of campus life for students. The recipient of this year’s Senior Student Development Award is Caleb Viers from Lone Tree, Iowa, a 2022 graduate.

During the awards program, Anya Butt, professor of biology, received recognition as Advisor of the Year recipient. Butt has taught at Central since 2002, taking over the environmental studies program and growing it into a more dynamic, applied program. She holds a master’s degree in physical geography from the University of Toronto and a doctorate in hydrology/hydrogeology from the University of Nevada. She has lived on four of the worlds’ five continents. She encourages students with discussion using international examples and case studies, advocates for international and intercultural education and supports international dinners.