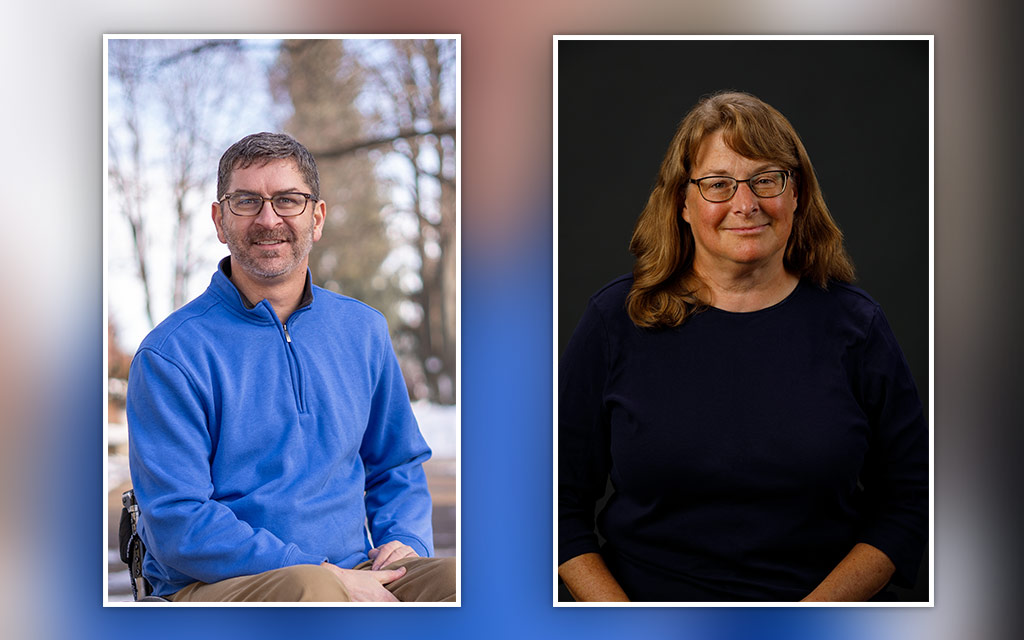 Central College bestowed special honors on two of its own — Dean Furness, a 1994 graduate, and Lori Witt, associate professor of history — during its Commencement ceremony Saturday, May 14.

Furness received an Honorary Doctor of Public Service honoris causa. While a student, he participated in football and men’s track and field, and he graduated with a degree in mathematics. Currently, Furness is a data and analytics specialist at Wells Fargo in Des Moines, Iowa. This work focuses on data visualization and digital dashboard solutions to help executives with decision-making activities.

Since becoming paralyzed after a farming accident in 2011, Furness speaks to groups via large keynotes and small settings about grit, determination and strength to keep moving through difficult challenges. His story was recognized as a “Top 20 of 2020” TED Talk, garnering more than 3.5 million views. A significant part of Furness’ story details his adventures in wheelchair racing, leading him to compete in major marathons around the country, including the Chicago and Boston marathons. Furness and his wife, Deonne, have three children and live in Martensdale, Iowa, where he enjoys woodworking and cooking and is active in the community as an assistant coach for the high school girls basketball team.

Witt has been awarded the Kenneth J. Weller Distinguished Professorship of Liberal Arts. Named after Central’s 18th president, who served from 1969-90, the three-year endowed professorship recognizes a distinguished faculty member and provides support for teaching, research and scholarship.

To be named the Weller Distinguished Professor, a term of three years, a faculty member must be an acknowledged competent professional, have attained tenure and be recognized among students and professors as one of Central’s outstanding teachers. They also must have an invitational approach to teaching that inspires in students an unusual level of intellectual curiosity and enthusiasm for learning. In addition, they must demonstrate excellence in performance and a sense of fulfillment in teaching courses that enroll students from a wide diversity of departments.

Witt earned her bachelor’s degree with honors in history from Trinity College in Deerfield, Illinois, prior to completing her master’s degree in history from Loyola University in Chicago. She earned a Ph.D. in history at Loyola University with a dissertation titled “More than a Slaving Wife: The Limits and Possibilities of Womanhood for Conservative Protestant College Women in the 1920s and 1930s.” During her time at Loyola, Witt was awarded a Summer Dissertation Fellowship through the Pew Program in Religion and American History at Yale University; the Arthur J. Schmitt Dissertation Fellowship; and the De Persis-Urbanek Fellowship in Women’s History. She started teaching at Central in 1998 and was promoted to associate professor in 2008.

As a past recipient of the Hutch Bearce Community-Building and Faculty Leadership Award, Witt has been recognized for seeking to build community and interdisciplinary perspectives including her Stonewall riots sponsored by Common Ground and her work with the Pella Historical Society. She also has served as History Day District Coordinator for the Historic Highways District for over a decade on the board of the State Historical Society of Iowa since 2017 where she sits on two subcommittees. Witt recently helped the Pella Historical Society and Museums coordinate a conference commemorating the 150th anniversary of the death of Dominie Scholte. Her current project is writing the history of Central.

Witt is the 11th Weller Distinguished Professor of the Liberal Arts. Her commitment to mentoring students, innovative teaching, academic excellence, experiential learning and interdisciplinary courses aligns with the purpose of the professorship.