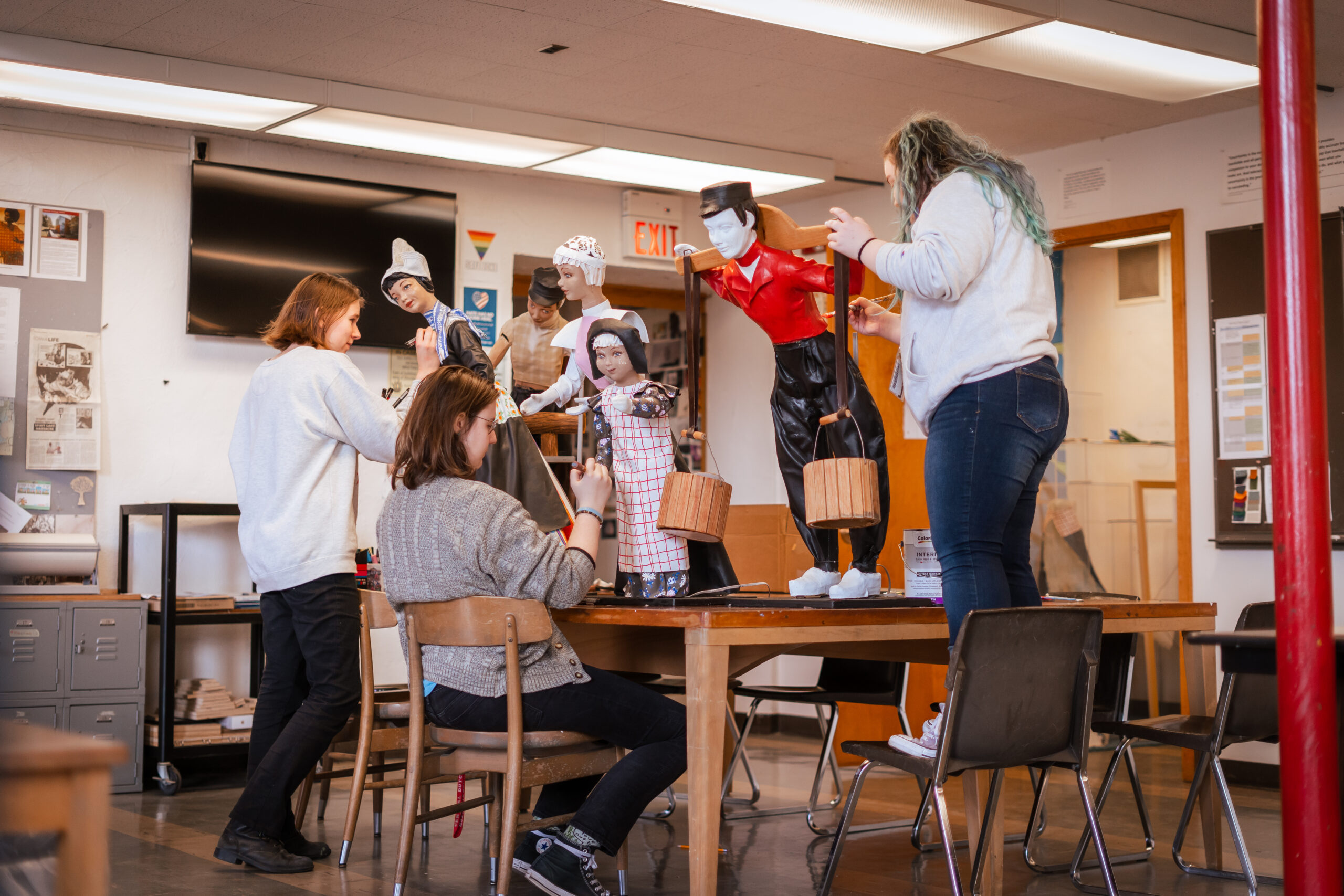 When Central College students from the Class of 2025 Amelia Brown, Fynn Wadsworth and Emily Wassink received an email inviting students to restore historic figures from Pella’s Klokkenspel, they knew they wanted to be involved. These first-year art students have been working to clean, repaint and restore four of the eight mannequins to be refreshed for Tulip Time, with assistance from Mat Kelly, associate professor of art; Brian Roberts, professor of art and a 1992 Central graduate; and Susan Swanson, associate professor of art.

One important piece of Dutch culture celebrated in Pella is the Klokkenspel downtown. The Klokkenspel, owned by the Pella Historical Society, was built in 1984. One incredible feature is the figurine performance, which occurs five times a day. Eight mannequins model vignettes of various historical figures who impacted Pella. These characters include people like Hendrik Scholte, who led Hollanders to Pella in the mid-1800s, and a wooden shoemaker, who embodies an important piece of Dutch culture.

Valerie Van Kooten, executive director of the Pella Historical Society, feels the figures add value to historical Pella and thought it was time to do something to preserve them. According to Van Kooten, her team initially was unsure of how to go about the project and who would be able to help them. When someone suggested working with Central art students, they all knew it was the right decision.

“I’m really happy we didn’t have to send them out of the community and that we could keep it all local,” Van Kooten says.

The Klokkenspel and its figures are about 40 years old, but there’s very little documentation about when these figures appeared, who made them or even what they’re made of. Because it’s so difficult to access the mannequins up in the Klokkenspel, upkeep has been difficult — leaving the figures with broken-off pieces and sun damage. With some care, new clothes and fresh paint, Brown, Wadsworth and Wassink hope to return the four-foot-tall figures to their original states.

“I have family who also went to Central, so this project is important to them, too,” Wassink says. “My grandma kept asking for pictures of the mannequins while we worked, so I know she’s excited.”

The team of art students initiated the project with research and conversations with their professors. Since receiving the mannequins, the students have spent every available moment in a Lubbers Center for the Visual Arts studio on Central’s campus, repainting beautiful details on each figure’s clothing and face. After hours of careful cleaning and restoration, they hope their actions will inspire more regular maintenance of the figures.

“I’d really like to imagine the people of Pella thinking, ‘The Klokkenspel, our heritage — they’re taking such good care of it!’” Brown says.

The art student team also emphasizes the importance of documenting their work to aid future maintenance. There seems to have been repairs throughout the years, but no records have been found to clarify what exactly was done.

“We’re taking lots of photos. We’re going to get all the information we can, and we’re going to write down anything we add to them, so there will be record of it,” Wadsworth says.

The students plan to complete the restoration of the first four figures by May so they can be displayed during Pella’s Tulip Time festivities. During Tulip Time, the figures appear each hour, so thousands of people will appreciate the refreshed elegance of the figures.

While the students have only four of the eight mannequins now, they plan to restore the remainder in the fall, without the pressing deadline of Tulip Time.

Kelly worked closely with Brown, Wadsworth and Wassink on the project and acknowledges all they have learned through this unique experience.

“It’s a chance for them to apply their visual communication skillset for the community,” Kelly says. “All the theory they’ve learned in classes can be put to practical use.”