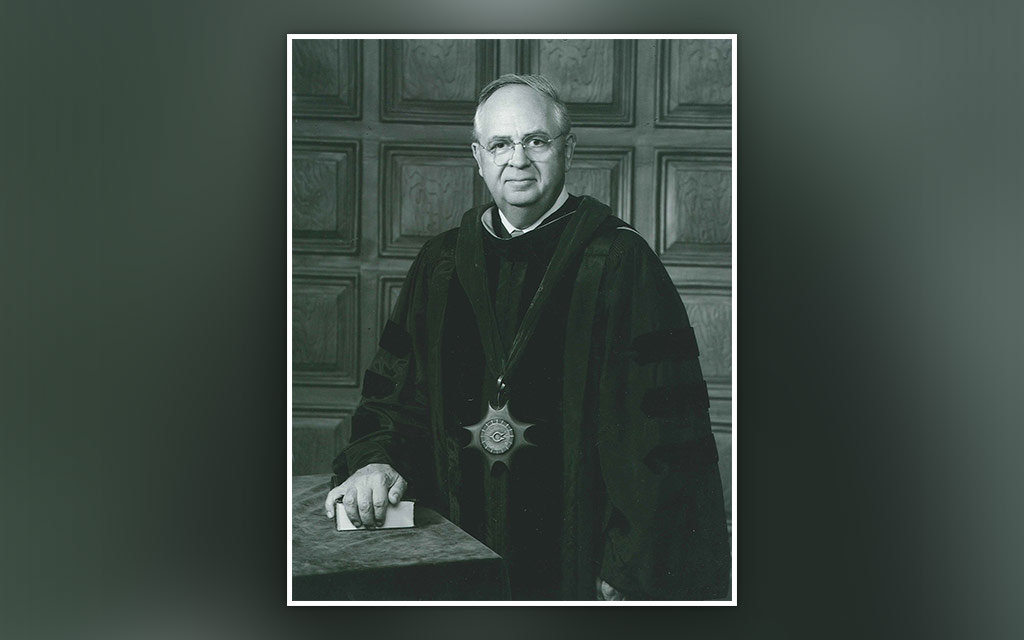 One of the most transformative and widely respected figures in Central College history, Kenneth Jay Weller, guided the school through a period of unprecedented growth as president from 1969-90.

Weller died Friday, March 18, 2022. A funeral service will be held at 11 a.m. Saturday, April 9, at Second Reformed Church in Pella, Iowa, and will be followed by a luncheon.

Weller led Central through seven major capital projects, resulting in 95% of the college’s classroom space being either newly constructed or renovated during his tenure, while more than tripling the college’s endowment. Under his leadership, the college’s enrollment jumped more than 35% to approximately 1,700 students. He also expanded Central’s extensive international studies programs to include campuses in England, Wales, the Netherlands, France, Austria, Spain, China and Mexico.

Weller also was an intercollegiate athletics leader and was active within the NCAA from 1975 through his retirement. He authored the original NCAA Division III philosophy.

A Holland, Michigan, native, Weller received a bachelor’s degree from Hope College (Michigan) before earning a Master of Business Administration degree and a doctoral degree from the University of Michigan. He served as a professor of economics and assistant football coach at Hope from 1949-69.

Weller attended Holland Public Schools and graduated from Holland High School in 1943, serving as president of his class for several years. He attended the University of Michigan on an engineering scholarship, but after one year, joined the Navy. He trained as electronic technician and served in Guam during World War II.

He returned to Michigan in 1946 and enrolled at Hope, graduating in 1948. He met Shirely Jean Gess during his senior year and they were married Aug. 19, 1950, in her hometown of Buchanan, Michigan. She taught elementary school until the birth of their son, William Arie Weller, Oct. 31, 1953. In 1954, Weller received a grant from the Danforth Foundation and moved to Ann Arbor, where he began doctoral work in economics and business at the University of Michigan. He received support from the Ford Foundation and was a research associate and lecturer in business economics.

In 1958 the family returned to Holland and Weller joined the Hope faculty, completing his doctoral degree in 1961. He served as assistant to President Irwin Lubbers through 1964. From 1965-67, he was coordinator of the Hope College Management Institute and became chair of the economics and business department. He received several academic awards, a Ford Foundation Fellowship, a Horace Rackam Pre-Doctoral Fellowship and was a representative of the Hope faculty to the Board of the Great Lakes Association. He participated in special programs in education, including a summer fellowship for the Foundation of Economy in Education at Merrill Lynch, Fenner and Smith in New York City, a seminar of the Danforth Foundation on Religion and Business Decisions at Harvard University and a seminar in contemporary economics at the University of Chicago. He was also an examiner consultant for the North Central Association. During the summer of 1965, the family lived in San German, Puerto Rico, where Weller taught at the Ramey Air Force Station for the Inter-American University of Puerto Rico M.B.A. program.

Weller was a member of the Holland Chamber of Commerce, a Herrick Public Library trustee and a member of the Holland YMCA board of directors. He served as president of the Parent-Teacher Association and chair of the Holland Council for Inter-School Cooperation, an organization of parochial and public schools. He and Shirely were part of a small group that helped launch a new congregation of the Reformed Church in America, which became Christ Memorial Church, where they were active members.

In August 1969, the Weller family moved to Pella, Iowa, where he began duties as Central’s president. It was a turbulent era as the Vietnam War raged and bitter protests engulfed many American campuses. But as the unrest swirled the following spring at Central, Weller provided students a listening ear. His empathetic leadership helped diffuse a tense situation.

Weller soon embarked on an ambitious building program that transformed the campus. Weller presided over the dedication of P.H. Kuyper Gymnasium, which was nearly complete when he arrived. His first major capital campaign resulted in the construction of what was later named Geisler Library in 1974. He also oversaw construction of the Vermeer Science Center, the Kruidenier Center for Communication and Theatre, H.S. Kuyper Fieldhouse, The Chapel and the Maytag Student Center, as well as major renovations to Douwstra Auditorium and Central Hall, with a small addition to Graham Dining Hall, all without incurring debt. The college also constructed several townhouse student residence units to accommodate a mushrooming enrollment, developed the A.N. Kuyper Athletics Complex — including what is now Ron and Joyce Schipper Stadium — and initiated a major effort to secure the college’s future by growing a previously modest institutional endowment.

After four years on the Government Relations Advisory Council for the National Association of Independent Colleges and Universities, Weller was elected to the NAICU board of directors in 1986, serving as treasurer in 1987 and as chair in 1988.

In 1987, Weller was named one of the top 100 college and university presidents in the U.S. through an Exxon-sponsored research project.

Weller’s Division III philosophy advocated that the focus of intercollegiate athletics should be on benefits for the participant rather than the spectator, and that student-athletes be treated no differently than students involved in other cocurricular activities. He also was passionate in his belief that excelling in one aspect of campus life need not come at the expense of other areas and that academics and athletics pursuits were, in fact, complementary. Weller pointed with pride to Central’s lengthy list of NCAA Postgraduate Scholarship recipients and CoSIDA Academic All-America honorees. He was called a founding father of Division III by The Intercollegiate Athletic Forum in 1996.

Weller was instrumental in the incorporation of women into both the NCAA and the Iowa Conference in the early 1980s and pushed for the expansion of opportunities for intercollegiate athletics participation by women. He served on an NCAA task force on the integration of women. His pioneering leadership in women’s athletics was especially evident on the Central campus through the college’s development of women’s intercollegiate programs in the early 1970s when few colleges or universities offered such opportunities. Central’s program quickly became a model. The college won the first NCAA women’s team championship offered on any level when Central captured the 1981 Division III women’s cross country championship. The Dutch also claimed the first five Iowa Conference women’s all-sports trophies.

A vice president of the NCAA in 1984, Weller also served on the NCAA Council and on the NCAA Executive Committee. Weller was named to the NCAA’s Long-Range Planning Committee and chosen as a member of the inaugural NCAA Presidents’ Commission when it was created in 1984. He served on a task force on the reorganization of presidents in the NCAA and chaired the resulting Division III President’s Commission in 1985. Weller also was chair of the NCAA Division III Steering Committee and later was a member of the NCAA Honors Committee, continuing to serve in that capacity after his retirement from Central in 1990.

Weller officiated track and field at Hope College and later officiated at Big Ten and Big 12 meets as well as NCAA Division I and III championships and the Drake Relays, serving well into his retirement. He was inducted into the Iowa Track Officials Hall of Fame in 2009.

In 2004, Weller was inducted into the Central College Athletics Hall of Honor and served for several years on the hall’s selection committee, authoring a rewrite of its constitution.

Following his retirement as Central’s president in 1990, Weller remained in Pella and was active in numerous charitable organizations. He helped create the Pella Foundation, which created an endowment to help fund initiatives by local nonprofit organizations and served as the foundation’s first chair. He was a longtime member of Second Reformed Church in Pella, serving in many capacities including terms on the church consistory. Weller also worked for the Pella Historical Society and was named a charter member of the Pella Chamber of Commerce in 1995. He served as president of the Moore Family Foundation.

The college presented Weller with an honorary degree upon his retirement. In 1999, Central constructed the Kenneth J. and Shirely Weller Center for Business and International Studies.

Weller also received the Distinguished Alumnus Award from Hope College, as well as an honorary doctorate from Hope and the Hope for Humanity Award in 2008. In 2010, Hope created the Ken Weller Endowed Professorship, which honors distinguished teaching in management. A leadership gift for establishing the professorship was provided by a former student and his spouse who wished to recognize Weller’s pivotal role in their lives. The RCA authored a resolution of appreciation of his service to the church on both the local and national levels.

Weller remained instrumental in maintaining strong ties between Central and Trinity University in Carmarthen, Wales, a partner in Central’s international studies program there. In 2002, Weller was presented with the Order of Knighthood of Oranje Nassau, an honorary recognition by the queen of the Netherlands for individuals of Dutch descent who have a history of outstanding contributions to Dutch-American relations.

Weller’s son Bill and wife Sally live in Crystal Lake, Illinois, while his son Matt and wife Molly live in Green Bay, Wisconsin. The Wellers have five grandchildren and five great-grandchildren, with another expected in July.