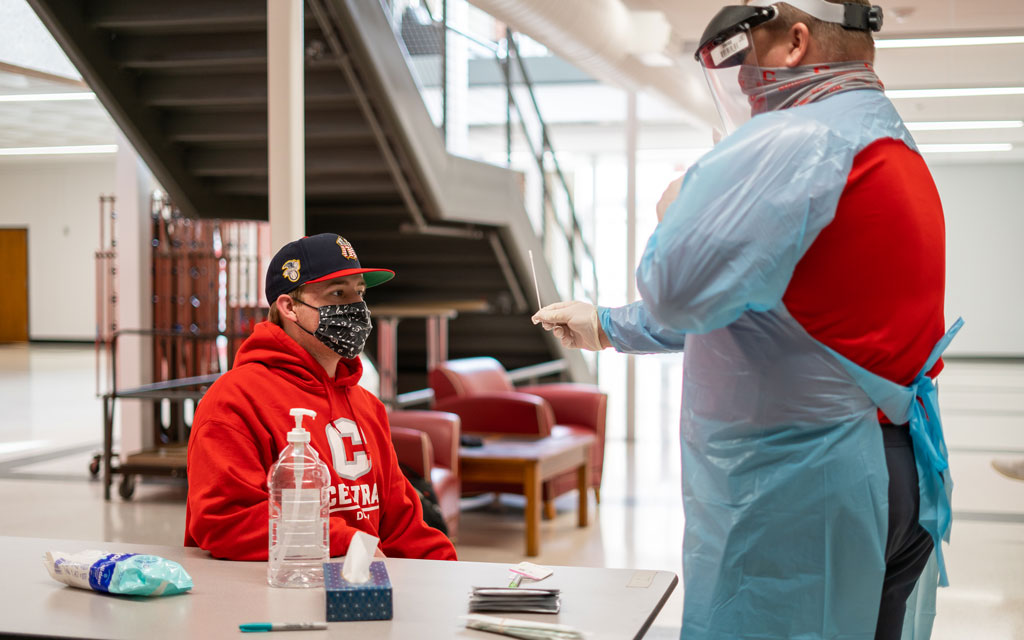 Helped by a lead gift from alumnus, longtime donor and former staff member Gary Dirksen, Central College has wrapped up a $30,000 fundraising project for COVID-19 test kits for student-athletes.

Student-athletes at Central and throughout all divisions of the NCAA have been tested regularly for COVID-19 in order to participate this season. The American Rivers Conference, of which Central is a member, requires weekly testing.

Dirksen got the project started with a $15,000 gift, which was matched by a combined 23 donors. The “Gary Dirksen Challenge” raised $30,000 by the end of February. Nearly $45,000 has been raised by generous alumni and donors in support of campus safety and COVID-19 testing needs for all students.

“During this past year of uncertainty, we have been humbled by the outpouring of support from members of the Central community,” says Sunny Gonzales Eighmy, a 1999 Central graduate and vice president for advancement. “We have been absolutely committed to competition for our athletics teams, and we do so in a safe manner that follows all public health and NCAA guidelines. The support from Gary and those who matched his challenge have helped minimize the effect the pandemic is having on our student-athletes. We are so appreciative as these resources are helping keep our student-athletes and staff safe while continuing competition.”

Dirksen, Class of 1969, joined the admission staff at Central after graduation. In 1973, he was named associate director of admission and four years later was appointed director of financial aid. He served in that role at Central until 1993. Dirksen then was coordinator of institutional research from 1993-97.

“I feel extremely blessed to be in a financial position to assist Central in its fundraising efforts in projects such as this one that directly assist students,” Dirksen says. “To each and every one of you who contributed to the challenge, a sincere thank you! I am so pleased that my challenge was met and am overjoyed to be able to make this donation to assist the outstanding young men and women who comprise the Central College athletics programs.”

At Central, Dirksen was a founder of Theta Kappa Alpha, active in intramurals, choir, and student campus activities board and was president of men’s housing. In 2004, Dirksen was honored during Heritage Day with the Central College Presidential Service Award.