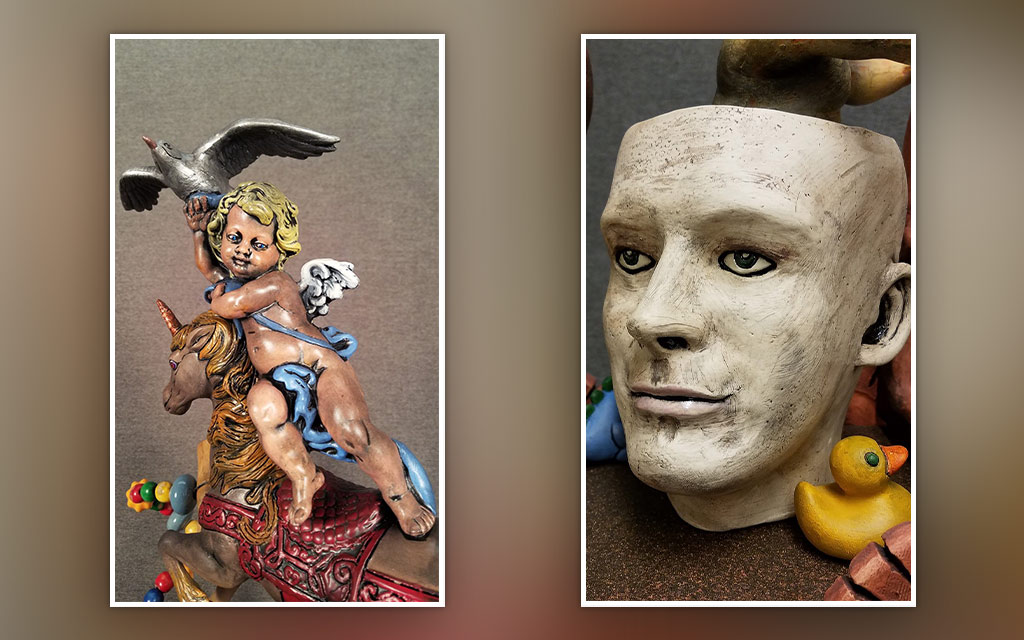 Central College will welcome the works of alum Ryan Bredlau to the Mills Gallery in the Lubbers Center for the Visual Arts from Sept. 25 to Oct. 16. His exhibit is titled “Celestial Entities.”

Bredlau grew up in Iowa City, Iowa, and received a bachelor’s degree in art from Central in 2005, focusing on ceramics, sculpture and glassblowing. After taking graduate classes at the University of Iowa, Bredlau attended Lindenwood University in St. Charles, Missouri, and earned a master’s degree in fine arts in 2010 with a focus in ceramics and sculpture.

During and after graduate school, Bredlau worked for several companies outside St. Louis as an artisan in bronze and cast iron. In 2011, he moved to Fort Wayne, Indiana, where he was a studio technician and adjunct professor of studio art for four years at the University of St. Francis.

Bredlau currently resides in St. Charles, Missouri, where he has been an artist in resident of ceramics at Craft Alliance Center for Art and Design in St. Louis; an assistant preparator at Laumeier Sculpture Park in St. Louis; and an adjunct professor of ceramics at Jefferson College in Hillsboro, Missouri. He currently is the studio technician at St. Charles Community College.

“Welcoming Ryan back to campus to showcase his work is really exciting for me,” says Brian Roberts, professor of art at Central. “As a student he wasn’t fearful about confronting unique and challenging investigations. What I find in his current work is his ever-present tenacity to create complicated sculptures, mixing in a little bit of this and that to tell his story about navigating through life’s complexities.”

In his own words, Bredlau describes his work: “The heart of my work has always been centered on the human condition and, more specifically, my own condition. As viewers, we can identify with what it means to be human and the everyday chaos that comes with our daily lives. The creation process is a source of therapy. Through this process of making and self-discovery, I try to connect with the frustration, amusement, disgust, happiness and pain that I feel internally and that is present in our society/popular culture. I use the human form while also substituting such objects as dolls, tools, furniture and toys to make a medley with which the viewer can engage. Such issues as innocence, mortality and the potency of humanity are constant filaments within my design process. My work can be very dark and surreal. I am greatly influenced by the California Funk Art Movement which was anti-establishment and reacted to nonobjective art in the 1960s. Funk artists took everyday objects and placed them in irrational arrangements as a protest to the slick forms of the abstract movement. That absurdity has also carried over into my work, which tends to have a whimsical playfulness to its composition.”

The public is invited to an artist talk and reception at 5 p.m. Friday, Sept. 25, in the gallery. The Mills Gallery is open from 9 a.m. to 5 p.m. Monday through Friday.