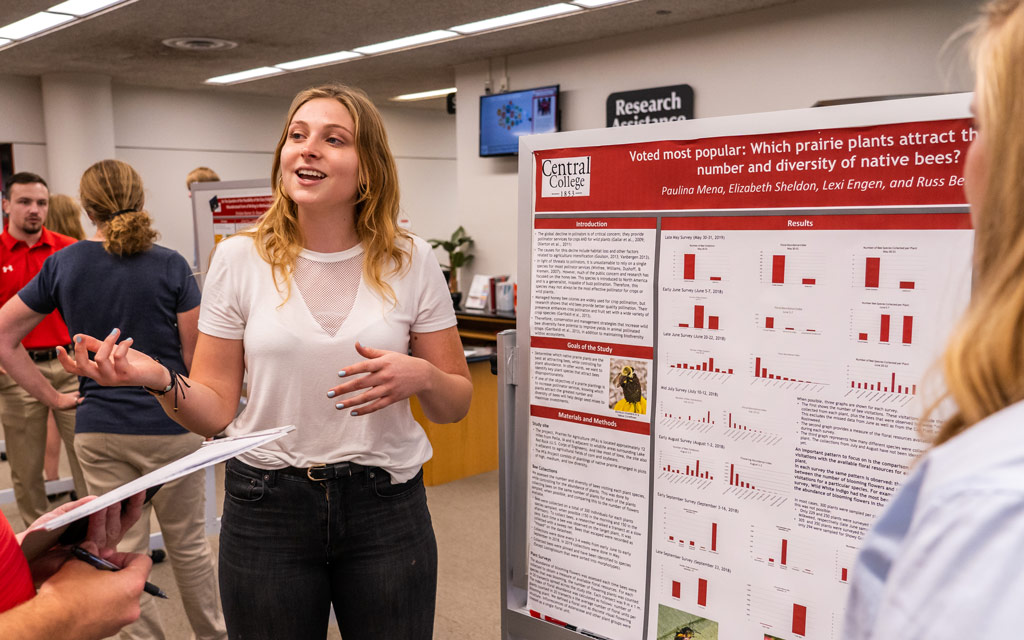 A Central College student has received the highly competitive Udall Scholarship, which recognizes college sophomores and juniors who have demonstrated a commitment to pursuing careers related to the environment, leadership, public service and issues related to Native American nations.

Elizabeth Sheldon, a member of the Class of 2021, is the first Central student to be awarded the competitive Udall Scholarship since it was founded. She competed in the scholarship’s environmental category.

“Congratulations to Elizabeth on earning this scholarship. As the Udall Foundation has recognized, Elizabeth has a strong track record and a commitment to doing work that makes a difference to the environment, both in a research role and in a hands-on capacity,” says Mary E.M. Strey, vice president for academic affairs and dean of the faculty. “The support she received from Central faculty demonstrates Central’s commitment to mentoring our students.”

Sheldon is an environmental studies major from Chandler, Arizona, with a 3.5 GPA. She also is a student leader and active member in Central’s student Sustainability Coalition, which works to promote environmental awareness in the Central community. One of the group’s recent successes was placing individual recycling bins in all residence hall rooms on campus.

Sheldon also is the president of the college’s Green Fund, a student-led group that helps fund student sustainability initiatives. After graduation, she seeks to become a professional fundraiser for an environmental nonprofit organization.

Last summer Sheldon collaborated with Lexi Engen, also a member of Central’s Class of 2021, on a summer undergraduate research project titled “Voted Most Popular: Which Prairie Plants Attract the Greatest Number and Diversity of Native Bees.” Their project was one of 15 projects conducted by students who worked full time on research throughout the summer; and was presented at the 2019 annual conference of the Association for the Advancement of Sustainability in Higher Education.

Each year, the Udall Foundation grants the scholarship to 55 applicants — from a pool of more than 500. Established by Congress in 1992, the scholarship honors the legacies of Morris Udall and Stewart Udall, former Arizona congressmen who were powerful and effective advocates of Native American self-governance and health care, as well as the stewardship of public lands and natural resources.

Each Udall Scholar receives a scholarship of up to $7,000. In addition to receiving scholarship funding, recipients receive resources to enhance their education and professional development and network with other Udall scholars.