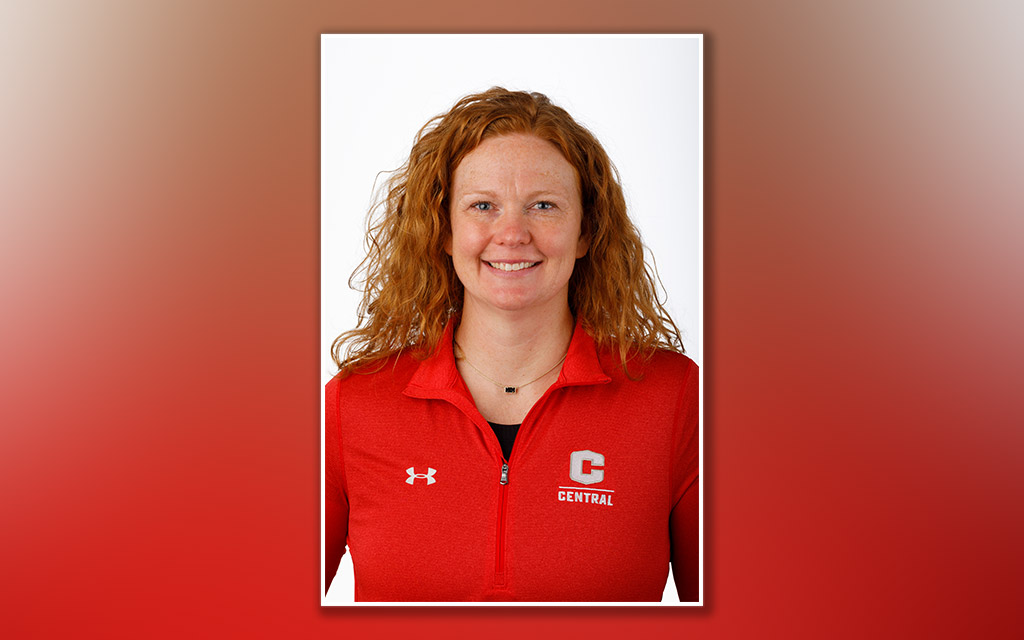 A 2006 Central graduate, Hedrick-Rozenberg is a veteran swim coach and also a triathlon competitor, already serving as swim instructor for Central’s women’s triathlon club this year.

With support from USA Triathlon, in August Central became the 31st school nationwide and the second in Iowa to offer women’s triathlon. It will transition from a club sport to varsity status next fall. Women’s collegiate triathlons feature sprint-distance races including a 750-meter open-water swim, a draft-legal 20-kilometer bike ride and a 5-kilometer run. The varsity season includes three regional qualifiers followed by the Women’s Collegiate Triathlon National Championships.

As an athlete, Hedrick-Rozenberg has competed in two sprint triathlons as well as the swim portion of numerous team triathlon events. She’s nearing completion of USA Triathlon Level I certification training and also has American Swim Coaches Association Level 2 certification. She’s served as head swim coach for the city of Pella since 2002 and of South East Aquatics since 2010, is a member of the Iowa Swimming board of directors and serves as secretary for the Iowa Swim Coaches Association board of directors.

“Jennie is ideally suited to building Central’s triathlon program,” athletics director Eric Van Kley said. “She brings a lot of energy, experience and a great network of relationships among swimmers and coaches in Iowa and the Midwest, which will be very beneficial in recruiting. The best-trained triathlon coaches and athletes have a successful swimming background.”

Hedrick-Rozenberg, who spent the past 14 years working at Pella Corporation in digital learning, sees Central as a prime location to build a nationally competitive triathlon program.

“We have Lake Red Rock, including Roberts Creek, which is a smaller body of water that can be used for an open-water swim and a great place to train, and then our trail system gives us a long range of trails without having to cross a road. And it’s so easy to access that from the campus.”

Central also has a challenging on-campus cross country course that has hosted conference and regional championship events and can be utilized for training.

Another key ingredient is the strength of the liberal arts education Central provides.

“Triathlon and Central are a great mix,” Hedrick-Rozenberg said. “Central is very dedicated to academics and triathletes tend to be very dedicated as well.”

She learned that first-hand.

“Jennie had a great experience here as a Central student,” Van Kley said. “She’s very passionate about this place.”

Working with the athletes in Central’s triathlon club the past several months sold Hedrick-Rozenberg on the opportunity to coach.

“Just getting to know the athletes and how much potential there is on the team, and then just to be able to help grow the sport of triathlon,” she said.

The sport will grow at Central, and nationwide, as athletes are exposed to it, Hedrick-Rozenberg said.

“It’s a rewarding challenge,” she said. “The atmosphere around every triathlon I’ve attended is just amazing with the amount of positivity among the athletes. Yes, we’re competing against each other, but I’ve never heard so many ‘good jobs’ and ‘keep going’ from people passing you or who you’re passing. Everyone that you’re around in the triathlon world is so positive and encouraging. Once you get the triathlon bug it just stays with you and you want to keep doing it.”

Triathlon will be Central’s 20th intercollegiate sport and the first new offering since women’s soccer was introduced in 1995.

Hedrick-Rozenberg begins her duties this spring.