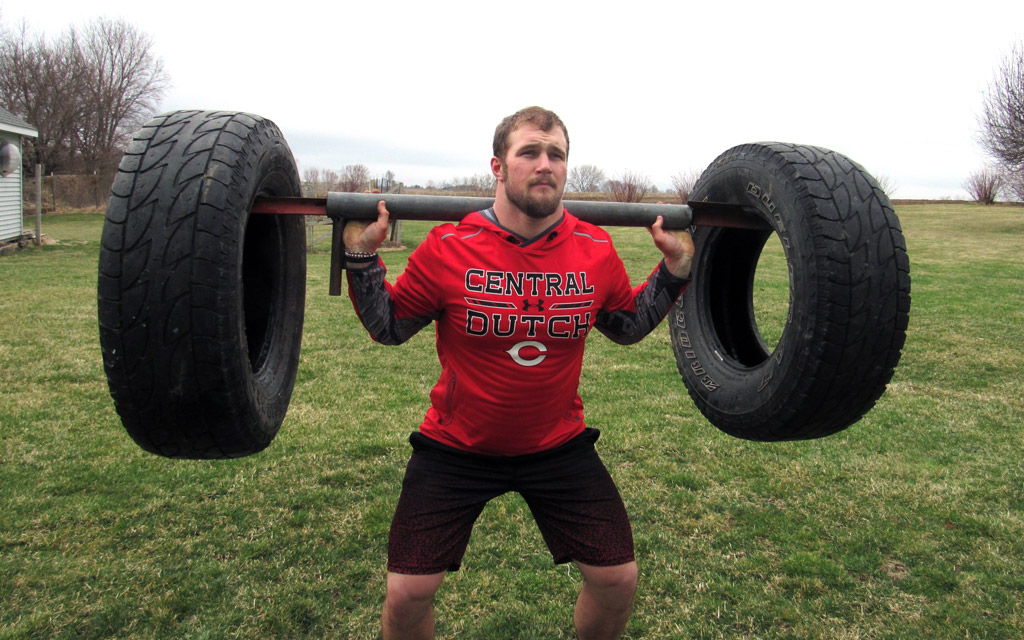 Utilizing an array of old school equipment with a new school mindset, Central College’s highly regarded strength and conditioning program is launching a creative approach to spring-semester training for student-athletes. A move to remote learning for Central College classes this spring temporarily ends access to the abundantly equipped Ron Schipper Fitness Center, along with thousands of gyms and workout facilities nationwide. But strength and conditioning coordinator Kyle Johnson and assistant Charles Friday have already contacted Dutch student-athletes, outlining a detailed  “Accelerating in Exile” program to ensure the temporary departure from campus doesn’t slow preparations for next season.

“The worst thing we can do now is to do nothing, to get out of our good habits, to slow down the momentum that we’ve gained over the winter months in our training and regress,” Johnson told the student-athletes in an introductory video. “That’s going to be the easy thing to do and what a lot of people are going to do in both school and athletics. We need to keep moving the needle, we need to keep finding new ways to get better and come up with the best training plan that we can to finish strong this spring semester.”

High-end strength and conditioning equipment is beneficial, but there are other ways to enhance performance levels.

“We’re not going to be able to snatch, clean and jerk like we normally would on a platform with a full bumper set,” Johnson said. “But we can still do explosive movements, lifts, throws and jumps with regular, everyday household equipment that you might have in your basement or garage.”

While some student-athletes might at least have a set of barbells at home, they can rely on simple items like a fitness ball, jump rope, resistance band, towel and five-gallon water jugs all purchased for less than $50 when making a grocery run to Target or Walmart. The Dutch coaches sent a list of low-cost training tools.

Along with a detailed weekly workout plan, Johnson and Friday posted YouTube videos where they demonstrate each exercise.

“I told him we had to think outside of the box,” he said. “He came up with this.” 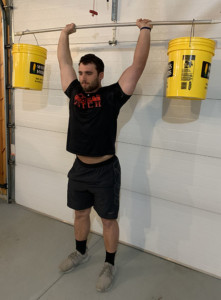 Johnson senses the Dutch will embrace the new program.

“They might like it more than what we normally do for a while,” he said. “It’s different so it becomes a new challenge.”

Having to work out in isolation rather than with regular team lifting groups is more difficult to overcome.

“That’s the hard part,” Johnson said. “Here, they have consistent training partners every time that they work out with.”

But he’s hoping the videos will serve as motivation.

“It creates some accountability,” he said. “(The student-athletes) are visual people. When they see our faces, that makes them feel a little more accountable than reading an email.”

Johnson and Friday will check in with the student-athletes frequently.

“We’ll do some video meetings on the Zoom platform, which is what they’ll be using with classes,” Johnson said. “We’ll meet with teams and groups, or maybe a team’s captains or seniors.”

They’ll be connected via email, cell phone and text messages as well.

“Adversity can create personal growth,” Johnson said. “We need to look at what we can learn from this and how we can gain from it.”