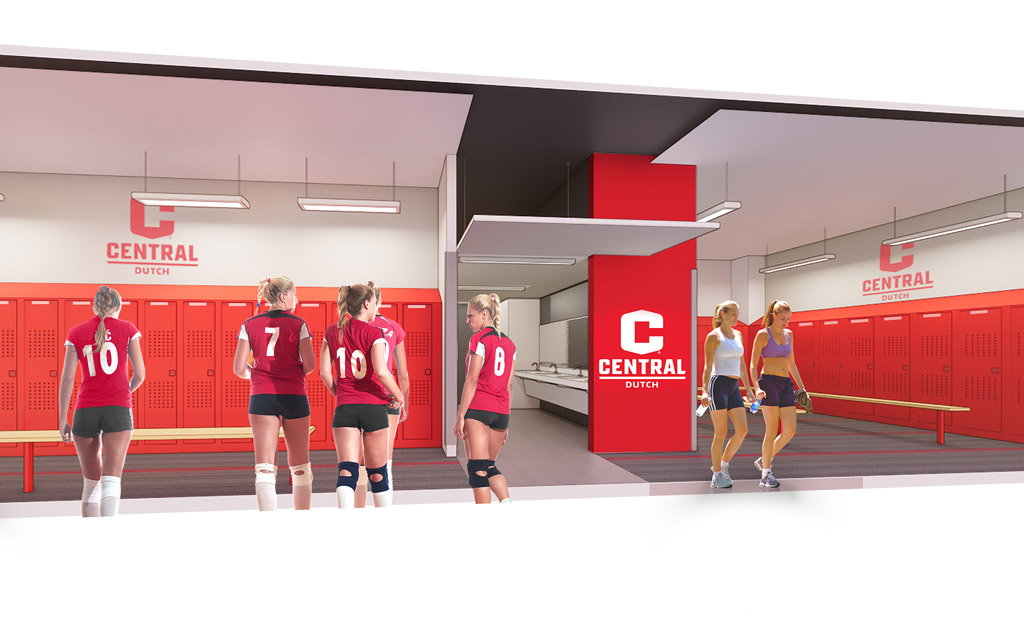 Work will begin in early March on the lower-level renovation of P.H. Kuyper Gymnasium following an overwhelming response to the Central College Forever Dutch® 48-Hour Challenge.

Prior to the fundraising challenge, $220,000 was needed to reach the $3-million goal for the latest phase of the Forever Dutch initiative and college supporters blew past that figure, as $295,588 was raised. Excess funds will go toward the next phase, the $3-million upper-level building renovation.

“What a tremendous response,” athletics director Eric Van Kley said. “We’re extremely grateful for the support of so many of Central alumni and friends. They truly embody what it means to be Forever Dutch. And we’re even more excited about what this means for our student-athletes.”

The lower-level renovation includes construction of a spacious women’s varsity locker room that includes a team meeting room, a reconfigured athletic training room that will provide more treatment space and an expanded athletics equipment room. Work is expected to be completed prior to the arrival of fall sports teams on campus in mid-August next year. Parts of the building will be inaccessible during the renovation. By waiting until the completion of the winter indoor sports season, Van Kley is hoping that disruptions can be minimized.

“We’ve got a pretty tight window,” he said.

Student facility needs are a priority at Central as the highly successful athletics program continues to grow. Central has nearly 600 student-athletes competing in 19 intercollegiate men’s and women’s varsity sports. A 20th sport, women’s triathlon, will be added in 2020-21.

“We’re thrilled about what this renovation means for our student-athletes, particularly for our women’s teams, who have established such a great tradition at Central,” he said. “The men and women have been sharing space and we’re really looking forward to giving our female student-athletes a home they can call their own.”

The athletic training room will be renovated to provide additional working space.

Central was an early leader in offering intercollegiate athletics opportunities for women. President Emeritus Dr. Kenneth J. Weller is a former NCAA vice president and played a key role in the NCAA offering women’s championships. Ten of the 11 NCAA national team championships won by the Dutch are in women’s sports.

The college received 330 gifts to the challenge and more than 50 percent (166) were from donors who had not previously given to the Forever Dutch initiative. The initiative has generated more than $13.5 million overall from 1,323 supporters, funding the building expansion, which opened in 2017. It included a new building entrance with the M. Joan Kuyper Farver Atrium and expanded Pacha Family Lobby, varsity locker room, wrestling room, Chip Griffith student-athlete lounge/study center, Athletics Hall of Honor, Dave and Ardie Sutphen golf/baseball/softball hitting center and major infrastructure improvements.

“We’re hoping we can quickly roll into the upstairs work soon after the lower-level renovation is completed,” Van Kley said.