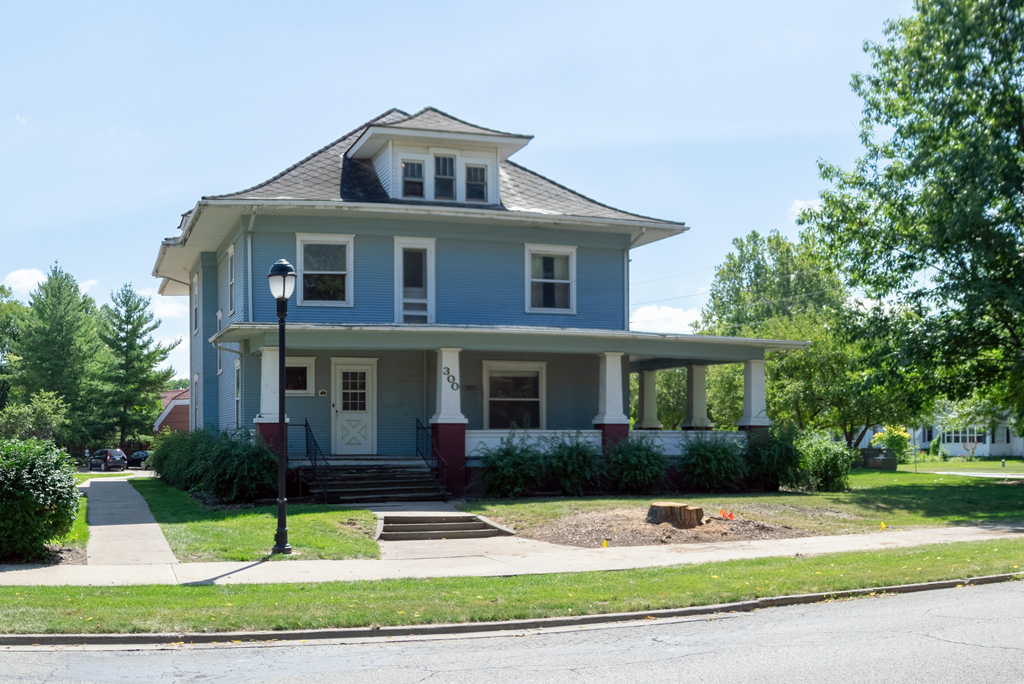 A historic home on the Central College campus will soon be traveling to a new location.

The Boardwalk House, located at the northeast corner of Broadway and University streets, drew a great deal of attention earlier this year when the college partnered with the Pella Historical Trust in an effort to find a new owner who could move the house to a new location. More than 100 interested parties originally expressed interest in the house and attended an open house.

Mikol Sesker is the new owner of the Boardwalk House. She plans to move the home to southern Marion County, approximately 20 miles from its original establishment.

Sesker is an Iowa native who currently resides in the state of Nevada.

“It has always been a family dream to own and operate a sustainable organic farm. Sometimes life events really force you to reflect on your goals and take giant leaps of faith,” Sesker says.

A few years ago, her brother was diagnosed with cancer, providing the reflection and opportunity to push the family farm concept to fruition. Three years ago, she partnered with her siblings, Nathan Sesker and Megan Sesker Enriquez, to work on a family dream project-a micro-scale organic family farm named Mint ‘N More. (MNM is strategically named to represent the initials of the three siblings.)

Mikol Sesker purchased 20 acres of farmland in Marion County and her brother got to work creating buffer zones and planting beds before his death from cancer in May 2017.

“Unfortunately, Nathan can’t be here, but we can carry on his spirit and his dream,” Sesker says. After he died, she dreamed of finishing the project and started looking for a large, older house to put on the homestead.

“I was originally looking for an American Four Square because it is one of my favorite styles. It just happened that my Mom (Jane Sesker) saw the coverage about the Boardwalk House on the news and thought it might be a good fit,” Sesker adds.

Her parents attended an open house the college held and encouraged her to add her name to the list of potential owners.

“From the minute I saw it, I knew that this house would be the perfect farmhouse. The back porch lends itself to the sweeping views of the countryside. I think it is a great fit for the house,” she says.

“One of my passions in life is the rehabilitation of old homes. I believe that moving the Boardwalk House onto the farm keeps with the idea of minimizing waste and living an eco-friendly lifestyle while also preserving a piece of local history. I look forward to breathing new life into the home while maintaining all the beautiful features that it has to offer,” Sesker says.

“We want this homestead to spawn a network of small farms that we call Mint ‘N More,” she says. “We want to build an experimental small-scale farm that is soil-centric. We’ll use permaculture and various intensive growing methods to complement growing cycles. We will invite people to stay in the home, and envision a community sharing and learning from each other.”

Sesker will literally be taking the home over the river and through the dales, under the electrical wires and across the tracks, before it lands on its new foundation on Mint ‘N More Farms.

Billy Bell Housemoving of Colfax will move the house over two to three days. Preparation for the move, however, will take several weeks. Sesker and Bell currently are working on getting transportation permits and coordinating with three electrical companies to move overhead wires.

According to house-moving experts, a routine house move involves digging around the foundation, cutting openings in the foundation walls, inserting steel beams and jacking up the building. Dollies are shoved beneath the house, and then a truck tows the load away. At its destination, the house will be lowered onto a new foundation.

Over the next few weeks, passersby will notice other work happening at the house. Contractors will deconstruct the roofline down to the attic floor while it is in Pella and then reassemble once it is on its new foundation. The white porches and columns also will be removed for the trip. All of this will allow the house to fit on the road and under power lines more conveniently.

“My contractor understands I want to reuse as much material as possible and have it be the same,” Sesker says. “I sincerely want to honor the original structure of the house. I’m saving radiators and piping and reconstructing those as well.”

“We are happy that this house, which has a lot of character, is being put to use by someone who will preserve it and can appreciate it,” says Tom Johnson, vice president of finance at Central. “We are grateful to the Pella Historical Trust for its help in making this happy ending.”

Sesker has spent the past several years building an online identity management and protection business, IdentityIQ. The company, which employs around 25 people with headquarters Henderson, Nev., and offices in California, offers a menu of credit monitoring and identity-theft protection services for a monthly fee.

The house was built in 1914 by second-generation lumber businessman, Adolfus Waechter. It is a 4,500-square-foot, 13-room, five-bedroom home with wood lap siding, a nearly 600-square-foot front porch, hardwood floors and a hip roof. The college took possession of the home in 1989 from then-Professor of Religion, Richard Whitaker.

The college has used the property for student housing and for storage, but it is no longer needed. With support from the Pella Historic Trust, the college set out to find a new owner and offered $10,000 to prospective owners toward moving costs.

For updates on the moving process, check www.central.edu/boardwalk frequently.