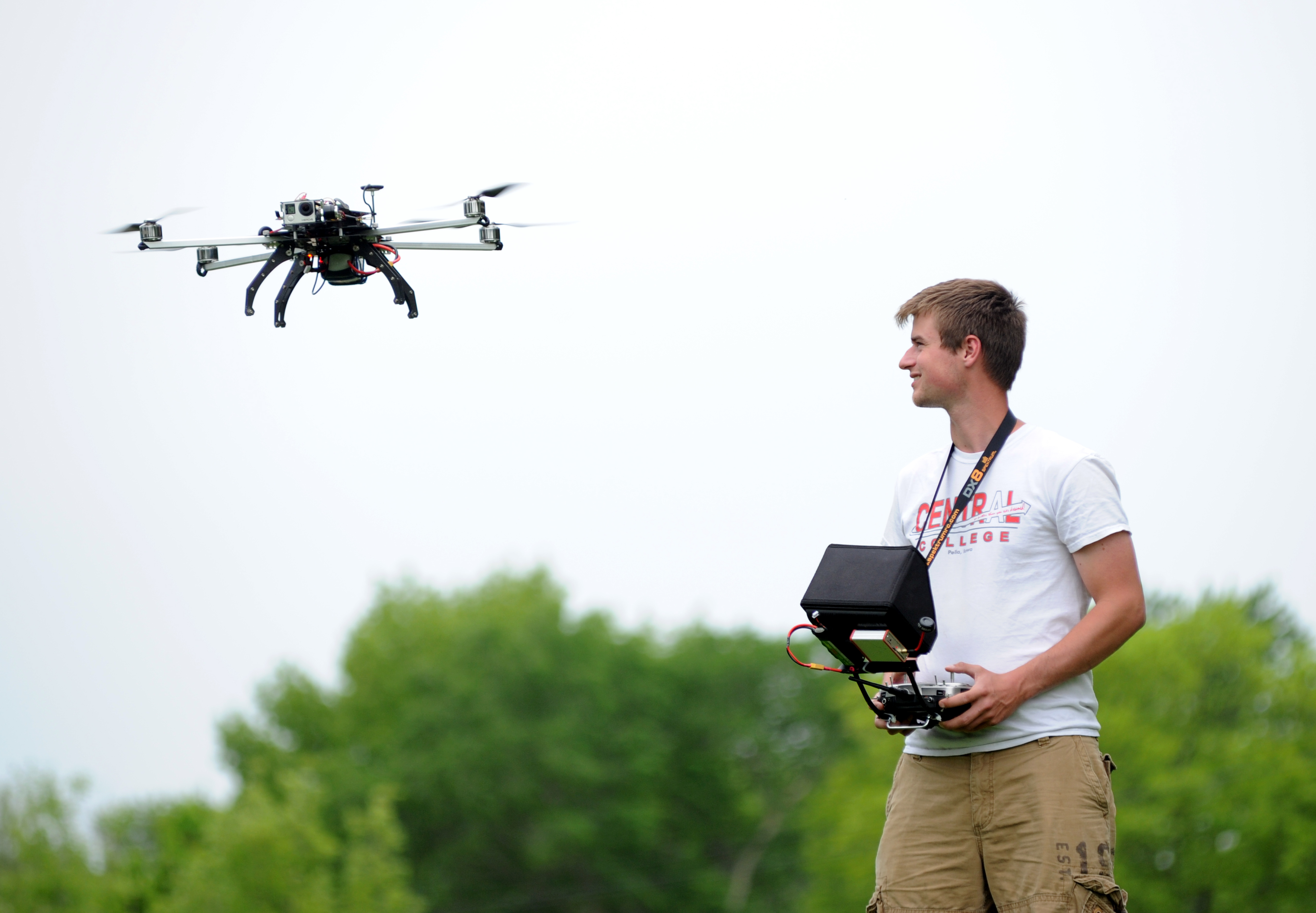 Featured: Invent Your Own Job

Jakob Steenhoek created a tough choice when he started a business. The 2015 Central College graduate found himself torn between job possibilities — none of which would have existed without his innovation. For now, he’s finding a way to do it all.

Steenhoek, a business management graduate from Pella, uses drones to capture video and photos for clients throughout Iowa. He started the business in entrepreneurship classes at Central, and instructor Wade Steenhoek (no relation) says he grew a full-time career option. “He could make a really nice living — tomorrow,” said Wade, director of Central’s Martin Heerema Entrepreneurship Program.

On top of that, Steenhoek discovered new ways to use drones, opening even more job opportunities. Since graduating in May, he’s also worked full time for his uncle’s business, Cornerstone Industries, Inc., where he uses GPS technology to measure quantities of sand and gravel for dredging companies.

“It’s very different from the artistic, marketing stuff,” Steenhoek said of the new technology. “It’s far more accurate than you can be with any other method, so it’s a really big value to people.”

Steenhoek saw his first drone while vacationing in Orlando in 2013. Another tourist showed him a small quadcopter, and Steenhoek was fascinated. He and his father (a farmer, construction business owner and amateur pilot) immediately saw possibilities for crop scouting.

Steenhoek also wanted to run a business, and his studies at Central offered a perfect chance to test his prospects.

At Central, Wade Steenhoek said classes focus on entrepreneurial thinking and opportunities to solve problems. These skills are useful in every setting, he said, and Steenhoek used them to make his idea happen.

Before launching his business, ExplAura, Steenhoek did extensive research to find his best strategy. He met with farmers, realtors, county officials and corporate representatives to identify potential customers and test ideas. Aerial video interested more clients than crop scouting, so he dropped his original idea.

Many clients were first interested in helping a student, Steenhoek said — then were impressed with the services he could offer. His contacts started asking how much it would cost to get the shots they wanted, and when fall colors hit central Iowa, Steenhoek was busy capturing video throughout the region.

Joel Bennett, founder of coworking location Veel Hoeden in Pella, said Steenhoek’s passion and curiosity got his business off the ground. While researching, Steenhoek connected with Bennett and other local entrepreneurs at Veel Hoeden, where he had completed an internship. They helped refine Steenhoek’s business plan and jumpstart his networking efforts.

Wade Steenhoek said this thorough investigation makes Steenhoek unique among business owners. “That’s incredible — very few entrepreneurs actually do that,” Wade said. “He’s been a model of how to do it.”

Steenhoek said he might not have known where to start without relevant classes at Central, and lectures and assignments got him excited about entrepreneurship. “I thought, why not go all out for it?” Steenhoek said. “If we’re going to have to network for the class, why not do it for real?” Using drone technology took Steenhoek into uncharted territory. Because the Federal Aircraft Administration (FAA) has not settled regulations yet, he hired a lawyer to outline boundaries for what is permissible and safe.

“I always want to be more cautious than careless,” Steenhoek said. He calls local airports before flying his drone nearby and said he turns down requests where people are at risk. “That can be a challenge to say no,” he said, “but you have to do it.”

Wade Steenhoek said he was impressed to see Steenhoek dive into challenges of legal gray areas. “There aren’t many people in the state who know more about the regulatory environment for drones,” he said.

While exploring potential markets, Steenhoek met many clients whose needs matched his services. He found realtors who wanted to show off lake properties, hunting outfitters who wanted to display extensive grounds and architects who wanted to help clients envision a second-floor view.

Jenny Phan, corporate communications coordinator for Shive Hattery, said Steenhoek offered an important new option for the architecture engineering consulting firm. “The best thing he can do for us is help tell a story,” Phan said. “It brings people to the project virtually.”

Steenhoek’s videos accomplish what Shive Hattery couldn’t achieve through ground or aerial photos, Phan said — those are too close or too distant. Instead, Steenhoek helped create virtual tours of projects before they existed. “It’s almost like you’re in the drone,” Phan said. Steenhoek hasn’t stopped exploring all he can accomplish with drones. “There are so many possible things you could do,” he said.

While at Central, Steenhoek also completed minors in math and global sustainability and discovered many sustainability applications for drone technology. For his final, independent research project, he documented Shive Hattery’s restoration of a 100-acre coal mine and presented his work at a climate change conference hosted by Central College and Iowa United Nations Association.

In his new full-time job, Steenhoek combines aerial photography and mapping technology to provide accurate measurement for dredging companies — programming his drone to fly itself in precise patterns.

There is always new technology to explore, Steenhoek said, like infrared cameras that can monitor plant health and batteries that could overcome drones’ power limitations. Whatever the future for drones, he will never run out of options.