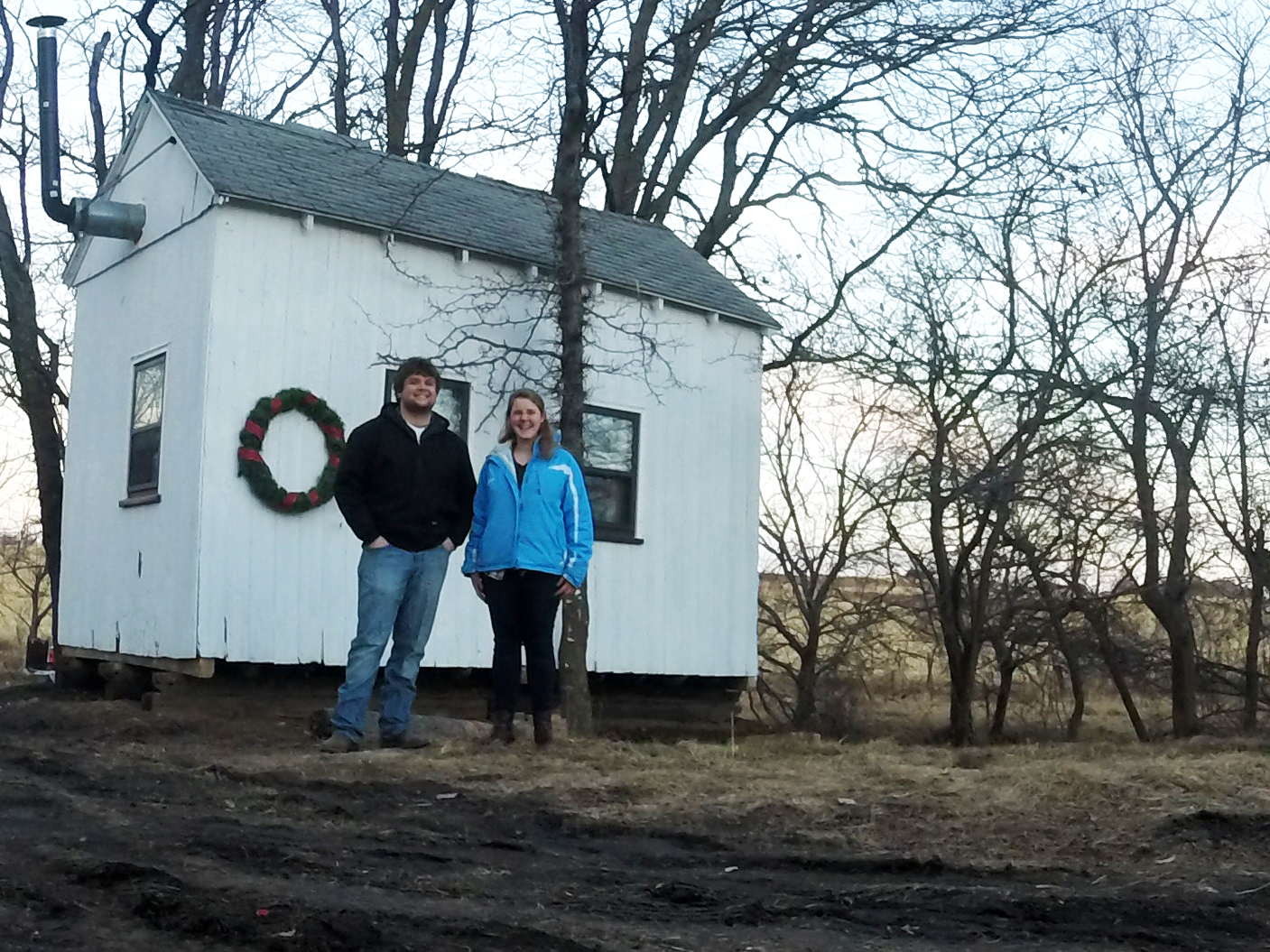 Featured: Building a House, One Scrap at a Time

Amy Andrews and Ethan Van Kooten had no money. How could they build a house?

The Central College students, both environmental studies majors, wanted to build a small, sustainable home for their senior project. They proposed a $3,350 budget — but when no grant money was available, they became scavengers to complete the project as cheaply as possible.  With truckloads of reclaimed materials and 10 weeks to build, the students created a house for $489.

“Everything we used was on its way to the landfill,” Andrews said. Anya Butt, associate professor of biology, said she doubted at first whether the students could finish their project with such limited time and money. “They forged ahead,” she said. “They were successful in building a tiny home for almost nothing — and they built it from what other people were throwing away.”

The biggest hand-me-down Andrews and Van Kooten reclaimed was a 52-year-old granary being used as a storage shed. “My great-great grandpa, great-grandpa and grandpa built it for shelled corn,” Van Kooten said.

The students moved the dilapidated granary to Van Kooten’s parents’ land, where they placed it on skids to comply with zoning and insurance regulations (the heavy building is technically a movable structure). The students also rescued lumber, insulation, cabinets and countertops — even a chandelier — from local buildings being demolished and the Pella and Vermeer corporations. An old hog feeder became their loft, and they turned a deer stand into a ladder.

“They were very much constrained by what they had available,” Butt said. “They blew me away with how much work they did.”

“Everything we used was on its way to the landfill.” – Amy Andrews ’15

The students spent about 500 hours building the tiny home. Andrews, of Shellsburg, Iowa, said it was exhilarating to see progress, although the amount of work left to do was always intimidating. Feeling stressed was no bad thing, the students said, since it helped them reach an exciting goal.

“It’s nice to have to prioritize something you’ve really wanted to do,” Andrews said. “This is like all my “Little House on the Prairie” dreams come true.”

Van Kooten said he and his dad talked like kids together when they dreamed ideas for the tiny house. “If I could put it in a tree, I would,” Van Kooten said. Now the finished tiny home offers even more opportunities for Van Kooten’s family to connect. His grandparents, aunt and uncle live on adjacent farmland, and they plan to use the house as a family retreat.

“We’ve been talking about putting a cabin down there for seven years,” Van Kooten said. “There’s no power, there’s no TV, there’s no video games — it’s a new outlet for my family to get closer.”

Andrews plans to bring her friends and family for occasional getaways too, and the students have invited others to come and take ideas for their own tiny home projects.

“It’s kind of an ideal liberal arts project,” Andrews said. “You have to know a little bit about everything.”

Because of their tight (or nonexistent) budget, Andrews and Van Kooten worked toward different goals than many tiny home enthusiasts. They couldn’t aim for a stunning master home like those featured on the HGTV series Tiny House Hunters, Butt pointed out.

The students left out features they wanted but couldn’t afford, like a composting toilet and a solar water heater. But they still plan to add a 6-foot porch, plus rain barrels that will provide filtered water for the sink.

“They were successful in building a tiny home for almost nothing.”
– Anya Butt, associate professor of biology

“It’s awesome if you have thousands of dollars to buy a lot of materials and make something really beautiful,” Butt said, “but these students showed you can do a lot without a budget. The idea that so much can be reused is eye-opening.”

Andrews and Van Kooten say their project proves a tiny home can be feasible and affordable, and they hope it prompts others to consider ways they can become comfortable with a simpler, more sustainable lifestyle.

Meanwhile, Andrews said scavenging materials has become a habit now. The day after she and Van Kooten presented their tiny house to professors and classmates, she spotted shelf paper in a trash can.

With a wood stove, it’s easy to heat the tiny home built by Amy Andrews and Ethan Van Kooten.

What are tiny homes?

Whatever you want them to be! Generally, they have all the features of a “regular” home. Some people just want to downsize, others want off the grid, others want to travel with them!

It’s up to you. What’s tiny for a college student might be impossible for a family of four! Usually people talk about homes under 400 square feet.

More space, more rooms and more features are “standard” in new houses over time. The average American family size has been decreasing over the last 50 years, but the average American home size has been increasing. In 1973, the largest housing problem in the U.S. was overcrowding. Now, only a few generations later, many people can’t afford an average home.

Homes are responsible for 18 percent of CO2 release in the U.S., and housing materials not built to last end up in landfills. Residents can improve the energy efficiency of their homes by weatherizing — or downsizing, since smaller houses require less energy to heat or cool. Passive solar design can warm houses in winter and cool them in summer. Also, rain barrels can be a sustainable water source — and dark colors help the sun start to heat the water.

Project featured in “Tiny: A Story about Living Small” documentary: $26,000