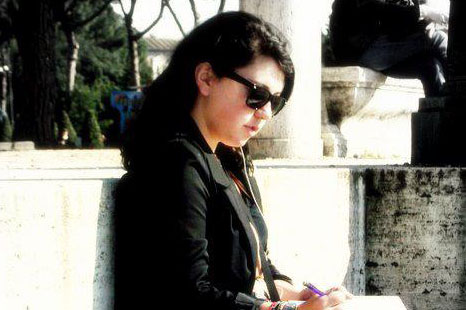 An elderly woman glanced at Sam Scheckel ’13 as Scheckel carefully guided the paintbrush in her hands to create a sunflower. She beamed — and Scheckel was deeply moved.

“It sounds so small,” Scheckel said, “but this lady hadn’t ever talked to anyone and never really recognized anyone. She just looked at me with the brightest smile, almost like saying, ‘Wow — someone’s finally paying attention to me.’”

This moment was just one of Scheckel’s favorite experiences from her internship in a memory care facility. A Central College graduate from Bettendorf, Iowa, Scheckel has been passionate about art since her professional journey began. Now a graduate student at Mount Mary University in Milwaukee, Wis., Scheckel is studying art therapy with the hope of being an art therapist in a memory care facility in the future.

According to Scheckel, art therapy is similar to counseling. However, instead of talking about feelings, a patient uses art to communicate his or her emotions. Scheckel first discovered this career in an episode of “Law & Order: SVU.”

“One episode had an art therapist in it, and I remember thinking, ‘What the heck is that?’” Scheckel said with a laugh. “That sounds like something I would love!”

Scheckel, who completed an art major and psychology minor, became even more interested in art therapy during a Central psychology class about older adults. For her service-learning project, Scheckel volunteered at a local assisted living facility.

“It sparks a memory in a place where people don’t remember very much. Just remembering little things like that is huge.” – Sam Scheckel ’13

Later, Scheckel’s passions for art and the elderly collided again in an internship in a memory care unit in Milwaukee. Scheckel provided group and individual art therapy for 40 residents during her eight-month internship. Scheckel said her main goal was not always to create a beautiful painting or sculpture with the residents. Instead, she wanted to make sure they felt successful and proud of their creations.

In one particular activity, Scheckel had her residents choose and paint a picture from a magazine. “A lot of times, the pictures that they choose will remind them of something in their past,” Scheckel said. “It sparks a memory in a place where people don’t remember very much. Just remembering little things like that is huge.”

Throughout her graduate studies, Scheckel has also been researching more ways to use art as a therapeutic tool. Recently, she began analyzing the art of paper-making — a process she learned from Central College Professor of Art Mathew Kelly.

At Central, students can use a paper-making lab to recycle old paper products into new, useable paper in any color or texture. “I don’t think it’s very typical to have something like this at a small, liberal arts college,” Kelly said.

Although Scheckel is no longer able to use the equipment in Central’s studio, she still uses a similar process to make paper. After tearing up old paper and soaking it in water, she puts it into a blender or beater to turn the paper into pulp. After pouring the pulp into a vat and onto a screen, the paper is pressed to release excess water. The final product is a coarse, recycled piece of paper, which can also be used again.

Scheckel saw that her residents loved paper-making, so she now plans to use this therapeutic tool in another internship. Scheckel currently works with The Youth and Family Project, a non-profit designed to support children with familial or behavioral problems. Scheckel works with children in a middle school, where she provides ways they can release their emotions through art.

“When they come in, I’m going to ask them to write down or draw something that they want to get rid of from their day,” Scheckel said. “Then, we’re going to rip it up and go through the paper-making process. They’ll create this really fun paper that was originally an ugly thing that happened in their day.”

After she completes graduate school, Scheckel wants to continue her career working with older adults. By helping older individuals in a memory care facility, Scheckel hopes to promote healing through a piece of clay, the swoop of a paintbrush or a torn piece of paper.