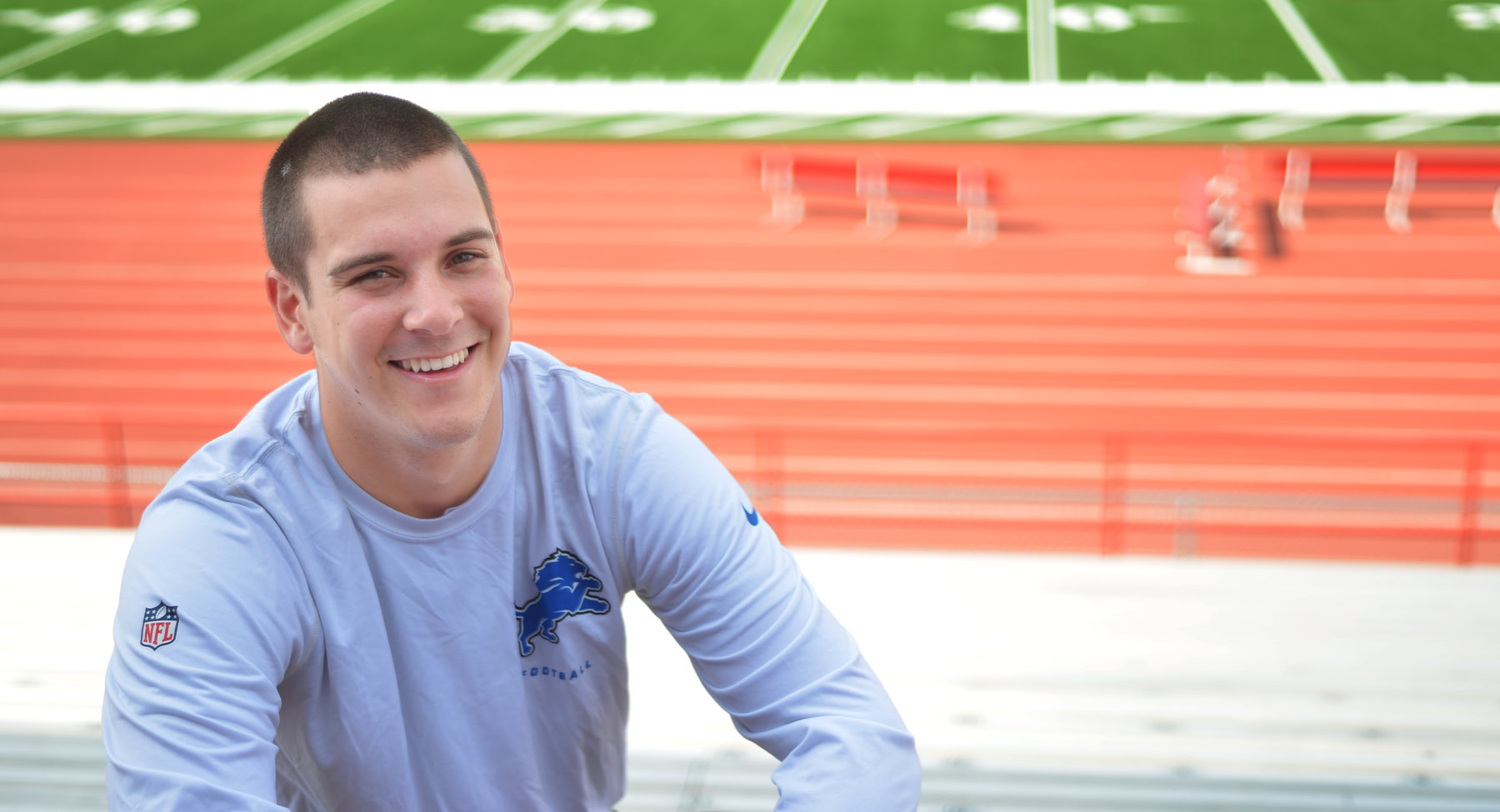 Blaze Smith (far left) on the field with the Detroit Lions as an athletic training intern.

Junior Blaze Smith discovered his future career while watching a football game—and it wasn’t the football players who Smith was idealizing, but the athletic trainers treating the team.

“I knew I wasn’t going to play sports my whole life, but I love the environment that comes with being in a sport,” says Smith. “I loved the idea of pursuing a career that would get me as close to that environment as I could as well as giving me a unique set of skills to help people.”

The Tiffin, Iowa native got a chance to do just that by interning for the NFL football team, the Detroit Lions, last summer. After hearing of a Central graduate working for the Green Bay Packers, he decided to try to get an internship in the NFL himself.

Out of curiosity, he searched online for open internships, and the Detroit Lions were looking for help. When Smith went to his adviser, Dustin Briggs, assistant athletic trainer, to explain what he wanted to do, Smith got a surprise – Briggs had interned with the Detroit Lions when he was an undergraduate. Briggs made a call, and several applications and interviews later Smith landed the internship.

As a part of his athletic training major, Smith worked with Central’s football, men’s soccer, baseball and softball teams, which gave him plenty of hands-on experience. Though he didn’t realize how much his Central education had prepared him until he started talking with the interns from other institutions.

“Their minds were blown by the experiences I was able to have at Central,” Smith says of the other interns. “None of them had been able to work with sports teams like I had. That says a lot about Central’s athletic training program.”

Smith lived a busy life in Detroit as an intern. Starting bright and early at 5:30 a.m. in the athletic training facility, he was busy working with injured players until 8:30 p.m.

“All of the skills I learned at Central I was able to directly apply to professional athletes,” says Smith. “Everything that I have done for Central’s sports teams I was able to do with the Detroit Lions.”

After interning once with the Lions, the team has asked Smith to intern again in the summer of 2014.

Smith’s internship wasn’t all work, however. He traveled to Buffalo, N.Y. and Cleveland, Ohio with the team when they played. He was also able to interact with the players daily, which he lists as one of his favorite parts of the experience.

“They are normal people,” says Smith. “They text, they play video games and they all have their own stories to tell.”

What’s next for Smith? The Detroit Lions have asked him to come back next summer – a position he has already eagerly accepted. In the mean time, you can find him this semester working in the athletic training room and out on the field with the women’s soccer team. He has big plans for the future, though.

“Five years from now, I would like to have a permanent job in the NFL as an athletic trainer,” says Smith. “Right now, though, I just need to keep learning and do anything I can do earn new opportunities.”

At a place like Central, he shouldn’t have any trouble finding them.