Featured: The Donut Man in the Corner Lab

If you ever find yourself in conversation with Jay Wackerly, assistant professor of chemistry, your first problem might be trying to spell the jumble of vowels and rare consonants tumbling from his mouth. Your second: a hankering for fresh donuts.

The organic chemist is trying to synthesize oxacalixarenes, which he calls “molecular donuts.” In essence, the hard-to-pronounce building blocks are large, circular molecules with holes in the middle. These cavities may fit other smaller molecules—the way a donut hole can slip smoothly inside a donut.

A young professor with just one year at Central under his belt, Wackerly was recently awarded funding from the PRF program at the American Chemical Society for his work. He viewed his first try at the application as a practice round, since most researchers don’t receive funding on their first attempt. Only 45 awards are granted each year nationwide. 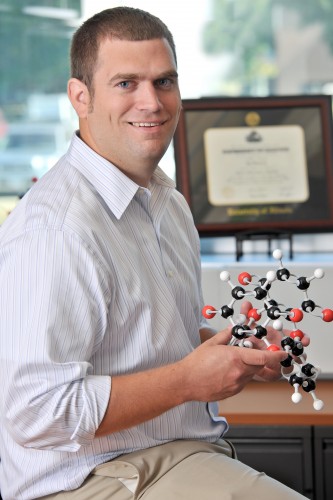 Jay Wackerly holds a model of an oxacalixarene.

“I didn’t believe it when I found out,” Wackerly says about the congratulatory email he received. “I didn’t think I’d get it on the first try.”

Wackerly will use most of the funding to pay five Central chemistry majors to be research assistants. Through Wackerly’s project, the students will get the kind of research experience that’s a huge boon to graduate school, medical school and industrial job applications.

It’s not surprising Wackerly wants to pass on his passion for molecular donuts to his students, since he was first introduced to the field by a mentor of his own, his postdoctoral advisor at Colby College in Maine. The study of oxacalixarenes is less than a decade old, and Wackerly’s current students could be full professors themselves before applications for the research are developed.

Wackerly, who earned his doctorate in organic chemistry from the University of Illinois before his postdoctoral fellowship at Colby, is optimistic that his research will have practical applications for scientific or commercial use. But he is keeping an open mind about what those might be. The funding he received is meant for basic research only, the kind that launches academic careers.

“I thought there were interesting challenges in the field,” Wackerly says of his decision to continue his postdoc research. “I thought I could solve those problems and create new oxacalixarenes that will have interesting properties.” 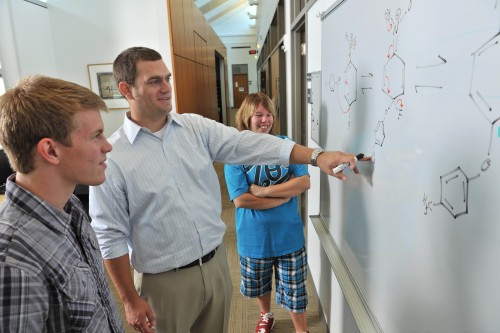 Wackerly and his students will try to prove to the chemistry world that they can create these molecules cheaply and efficiently with fewer impurities. The prospects look good, since similar bowl-shaped molecules, such as beta cyclodextrin and calixarenes, were synthesized decades ago and are now used in products such as Febreze and superglue, as well as for water purification and nuclear waste treatment. In the case of the famous deodorizer, the “smelly” molecules bind inside the donut, leaving even a college student’s couch as fresh as the day it was delivered.

This binding is similar to what Wackerly hopes to achieve with his donuts and donut holes. Still, it’s a new synthesis with different challenges. “We are making molecules no one else has ever made before,” he says.

If the synthesis is successful, Central students will be listed as co-authors on peer-reviewed articles—participating as scientists at the birth of a groundbreaking new field.