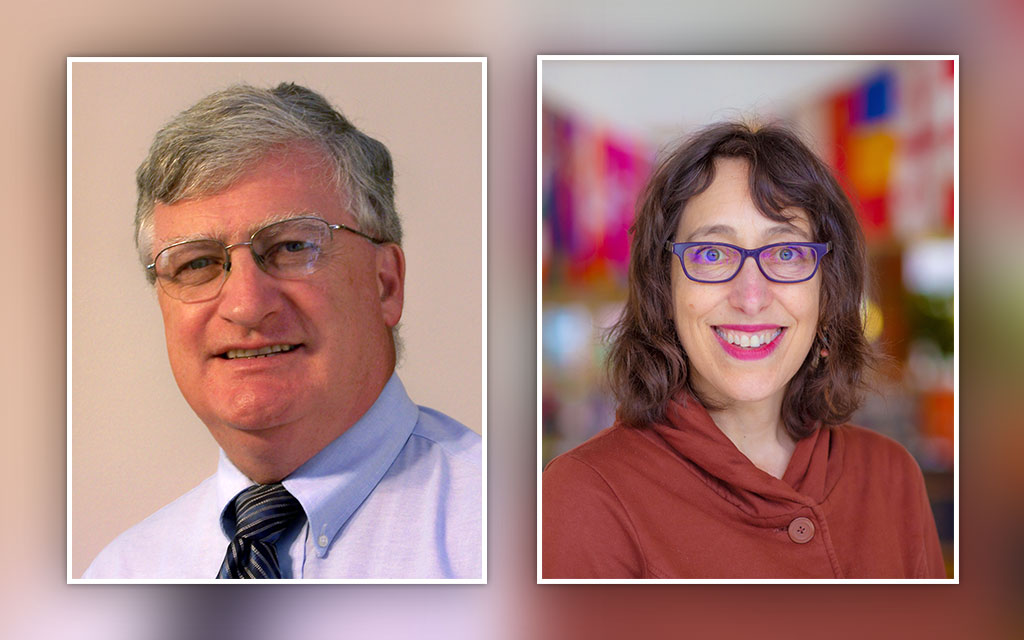 Terence Kleven, professor of religion at Central College, and Shannan Mattiace, a 1990 graduate, were honored at the college’s Commencement ceremony Saturday, May 15.

Kleven was named to the Dr. Jacob and Gela Schnucker Sessler Chair in Philosophy and Religion. Established in 2002, the endowed position recognizes distinctive faculty accomplishments and contributions to Central and provides support for teaching, research and scholarship.

Kleven has taught at Central since 1996. He earned his bachelor’s degree in religious studies from The University of Calgary, in Calgary, Alberta, and completed his master’s degree and Ph.D. at McMaster University, in Hamilton, Ontario. Kleven later served two postdoctoral fellowships — one at Boston College and Harvard University and another at Hebrew University of Jerusalem.

Kleven is a past recipient of international, national and regional awards, fellowships and grants, including those from the Lilly Foundation, the National Endowment for the Humanities and more than two dozen others. The Carnegie Foundation for the Advancement of Teaching presented him with the Iowa Professor of the Year award in 2001. Kleven has been awarded a Fulbright Scholarship twice, most recently to conduct research in Arabic Political Philosophy at The University of Jordan, in Amman, Jordan. He is currently preparing to begin this work soon.

Kleven’s service and leadership to the college include his years of service as humanities division chair and department chair; faculty representative to the board of trustees; and service on many Central councils, committees and task forces. He has taught 28 different courses in religion, history, philosophy and languages at Central. Kleven is also a part-time priest at St. James Episcopal Church in Oskaloosa.

“Terry is a teacher’s teacher and a scholar’s scholar. We are much enriched by his dedication to students and faculty and his commitment to teaching and advancing the mission of Central College,” says President Mark Putnam.

Mattiace, professor of political science and international studies at Allegheny College in Meadville, Pennsylvania, was awarded the degree of honorary doctor of humane letters. She graduated from Central in 1990 with majors in political science and Spanish. At Allegheny, Mattiace teaches and has done extensive research on Latin American Native American peoples, social movements, criminal violence in Mexico and migration.

Mattiace served as the chair of the international studies program at Allegheny from 2005-13 and of the political science department from 2014-18. In 2019, she was a Fulbright Scholar in Santiago, Chile. In addition, she is a recent recipient of a Harry Guggenheim Foundation Award for research on ethnic violence. In 2019, she also received the Julian Ross Award for Excellence in Teaching at Allegheny.

During her career, Mattiace has published several books and many academic journal articles on Mexican politics and has maintained a close connection to Mérida, Mexico.

“Shannan’s scholarly knowledge and research are a great service to society and highlight relevant issues related to electoral democracy, drug-related violence, poverty and human rights,” Putnam says. “Her efforts have focused on a critical understanding of Mexico’s economic and political relationship with the United States. She is, indeed, a distinguished professor, educator and researcher.”