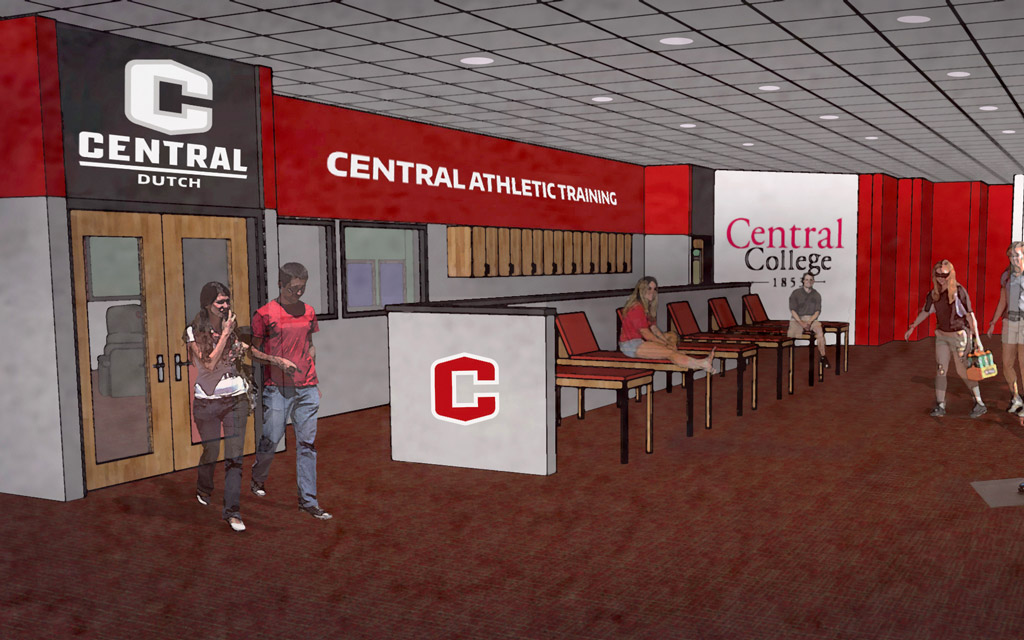 Fueled by more than 2,600 donors, work begins Feb. 24 on an extensive renovation of the lower level of P.H. Kuyper Gymnasium in the next $3 million phase of Central College’s Forever Dutch® initiative.

The lower-level renovation includes construction of a spacious women’s varsity locker room with a team meeting room, a transformed athletics training room that will provide more treatment space and an expanded athletics equipment room. Work is expected to be completed Aug. 3, prior to the arrival of fall sports teams. The area will be closed from May 25 to Aug. 3 and the college’s racquetball courts will close later this month. Other parts of the building may be inaccessible at times during the renovation.

The renovation was timed to launch after the completion of the men’s and women’s basketball seasons to minimize disruption, athletics director Eric Van Kley said.

“We’ve got a pretty tight window,” he said.

Fundraising is continuing for the next $3 million phase, a renovation of the 51-year-old building’s upper level. That will feature team meeting space, a new welcome center, recruitment space, offices and visitor locker room.

Van Kley is hopeful that the next $3 million goal can be quickly reached as well.

“We’d like to keep the construction crews here and quickly roll into the upstairs work soon after the lower-level renovation is completed,” he said.

Student facility needs are a priority at Central as the highly successful athletics program continues to grow. Central has nearly 600 student-athletes competing in 19 intercollegiate men’s and women’s varsity sports. A 20th sport, women’s triathlon, will be added next fall. The Dutch have captured 11 NCAA Division III team championships.

“We’re thrilled about what this renovation means for our student-athletes, particularly for our women’s teams, who have established such a great tradition at Central,” Van Kley said. “The men and women have been sharing space and we’re really looking forward to giving our female student-athletes a home they can call their own.”